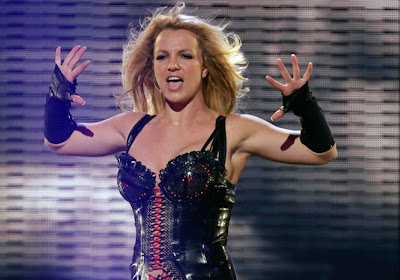 Britney Spears dethroned Lady Gaga and beat out Taylor Swift and Rihanna to headline the Forbes list of Top Earning Women in Music 2012 released on Wednesday. The 31-year-old “X-Factor” judge pocketed $58 million in the past year, more than any of the music industry’s cash queens.
The 90s pop princess turned tabloid trainwreck bounced back after her latest album, 2011’s “Femme Fatale,” went platinum. Throw in its accompanying world tour, her commercial endorsements and her Beauty fragrance line with ... Elizabeth Arden, and the “Gimme More” singer is grabbing millions.
“Britney has an electricity that connects with audiences on screen and off,” Lori Landew, the music attorney who helped ink a teenage Spears’ first record contract, told Forbes. “And it is that intangible quality that always seems to leave her fans, old and new, breathless.”
Brit had some stiff competition. Swift was hot on her heels with $57 million after the country star’s $1 million a night tour and lucrative endorsements with Sony and CoverGirl.
More female artists making bank by hitting the road include Rihanna, who came in third with $53 million thanks to her touring schedule, plus hit singles like “Diamonds” and “We Found Love,” and deals with Vita Coco and Nivea.
Lady Gaga, who topped last year’s list at $90 million, dropped to fourth place with $52 million earned from touring, record sales and her new Fame perfume.
“California Gurl” Katy Perry hit the top five with $45 million, boosted by her $60 million California Dreams tour.
Beyonce banked $40 million despite taking time off for baby Blue Ivy due to royalties from her big hits plus her House of Dereon clothing line, which put her in sixth place. Expect Bey-Bey back on next year’s list in a big way once her $50 million deal with Pepsi begins.
Adele ($35 million), Sade ($33 million), Madonna ($30 million) and Shakira ($20 million) rounded out the top 10.
The Forbes figures represent earnings from May 2011 to May 2012 before management fees, legal costs and taxes. The totals were tallied with data from Pollstar, RIAA and others, plus interviews with managers, lawyers and concert promoters.