Alicia Keys 'Thinking About' Shaving Head After New 'Do 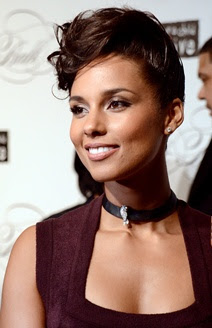 Alicia Keys recently chopped off most of her hair, and the singer is looking to go even shorter.
The R&B superstar debuted her bob hairdo this summer. In a recent interview, Keys said she wants to go "even shorter." Alicia Keys Earns Fifth No. 1 Album on Billboard 200 Chart When asked if she would shave her head, the 31-year-old replied: "I'm thinking about something like that. I'm telling you. I'm going there. I'm doing it." The Grammy-winning Keys arrived on the music scene in 2001 with braids, and she has mostly worn her hair long. She says with her new cut, she's able to do more with her hair. If she shaves her head, she'll follow a list of celebrities including Natalie Portman, India.Arie, Chrisette Michelle and Kellie Pickler.