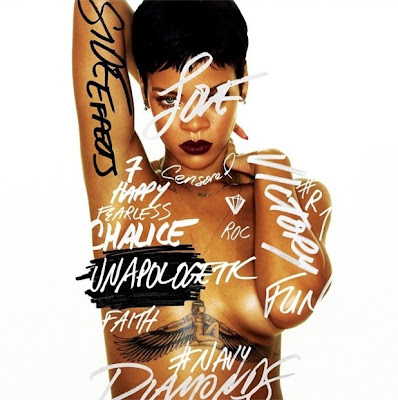 Rihanna has confirmed the title and artwork for her new album. The singer's seventh studio album titled Unapologetic will be released worldwide on ...
November 19. The accompanying artwork sees a topless Rihanna covered in words, including 'Diamonds' - the name of the set's lead single - and #NAVY, which we, her fans call ourselves. "I'm going to tweet the OFFICIAL title of the ALBUM soon!!!," she tweeted. "For now.... Here's the cover." However, the star later confirmed that the record will be titled Unapologetic, as seen on the black scribble across her right breast.

"My NEW album "UNAPOLOGETIC" will be released on NOVEMBER 19th WORLDWIDE #Navy," she tweeted. The collection's lead single 'Diamonds' was released last month and has reached number one on the UK chart and has so far peaked at number 16 on the US Hot 100. I'm a Real Rihanna fan but i gotta say, is this one eye-tatted-racy-raunchy image necessary? even if she wanted to sell an album without aggressively promoting (Case in Point Talk that Talk), it could still happen so why all the unnecessary edge. that said, i cant wait for the new sound and if Diamonds is anything to go by, we'll be in for a treat!!!!