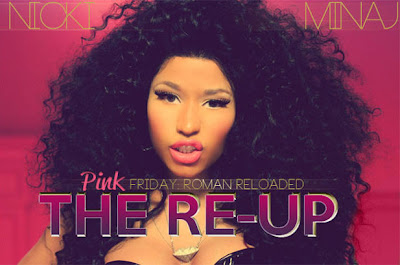 Just a few minutes after Rihanna tweeted her "Unapologetic" album cover, Nicki Minaj also took to Twitter to reveal the album cover to "Pink Friday: Roman Reloaded - The Re-Up. ...
" "lol that face matches the lyrics on the reup to a T!!!! lmao, wait til u hear it...u'll completely get it," Nicki  continued to tweet.  Nicki also gave fans a sneak peek at the video to " The Boys" by teasing a video still of herself and Cassie on set.  Besides "The Boys," expect to hear around six other new songs on "Pink Friday: Roman Reloaded - The Re-Up" when released on Nov. 19. The cover appears to be from the "I Am Your Leader" Video. Anticipation is wild!!!
Posted by afowzocelebstar