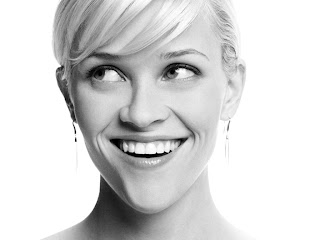 Reese Witherspoon is the "It" girl of the moment, living out her idyllic life (level-headed new hubby, an Academy Award under her belt), and is arguably the quintessential Hollywood girl of our era. The Water for Elephants actress has way more to her than her past high-profile bachelor boyfriends (Jake Gyllenhaal and Ryan Phillippe) and her ability to balance a low-key family life amidst serious fame. A few highlights of her more private persona: she was called Type A before she hit age 10, she loves her some nerdy board games, and she's started some legal action against aggressive paparazzi. Read on for some of our favorite Reese Witherspoon factoids!


1. Reese's mother nicknamed her "Little Miss Type A" when she was in the third grade.
When Reese was a mere 8 years old, Reese's mom penned her "Little Miss Type A" after the 3rd grader announced she planned on becoming the first president of the United States. That hopeful dream might not have ensued, but Reese went on to name her production company "Type A Films." One other nickname many don't know isn't the real thing: Reese! The actress was actually born Laura Jeanne Reese Witherspoon.

2. Reese thinks she is too short.
The actress told Marie Claire being short bothers her more than not being ultra-thin. The 5'1 actress definitely has to look up to new hubby Jim Toth, who is a nice tall drink of water. 12-year-old daughter Ave is just a few inches shorter than Mom!

3. Back in the 90s, she couldn't afford to hire help after her first child was born.
When Reese had her first child, Ava (with ex Ryan Phillippe,) she couldn't afford to hire help, so she spent time a lot of solo time at home with the new tyke. She has said: "It was so hard. I was out in Los Angeles... I really didn’t have any friends. And I had a baby. No one else who was 22 had a baby. I couldn’t go out.” Ryan and Reese had Ava in 1999, just three months after they tied the knot, and shortly after the release of their box office hit Cruel Intentions. We're betting help became affordable pretty quickly.

4. She comes from a family of doctors.
Reese was born in New Orleans, where her dad, John Witherspoon, was a student at Tulane University Medical school to become an Ear, Nose & Throat doctor (ENT). Reese's mother, Betty Reese, received a P.h.D. in pediatric nursing and works as a professor at Vanderbilt University.

5. Reese has taken legal action against paparazzi
After being followed and hassled and perpetually stalked by the paparazzi, Reese has decided to take the issue to court. Along with stars Cameron Diaz and Halle Berry, she is working with the LAPD's criminal investigation about the aggressive behaviors of the photographers. Some of their work has led publications like Us Weekly to change their policies on use of freelance paparazzi. Reese has had her own fair share of dangerous altercations with the photogs: when she was at an amusement park with her family, a photog conked a 5-year-old in the head with his camera in order to get closer to the Witherspoon clan. Eesh.

6. She lived in Germany as a young child.
Back when Reese's dad worked as a military doctor for the United States Army, he was stationed in Wiesbaden, Germany. After spending four years in the western Germany town, the brood moved to Nashville, where Reese and her brother John spent their childhoods.

7. Witherspoon was recruited as a model at the age of seven.
The future actress was selected as a child model for a florist's television advertisement when she was just 7, and went on to appear in more commercials over the years. At 11, she earned first place in the Ten-State Talent Fair in Nashville... we're still not really sure what that means.

8. Reese was a cheerleader who also loved to read!
While attending the Nashville all-girls school Harpeth Hall School, Witherspoon was on the cheerleading squad but still made room for her love of books. She excelled in school and has called her young self "a big dork who read loads of books." And apparently not much has changed in the book worm department into adulthood. "I get crazy in a bookstore. It makes my heart beat hard because I want to buy everything," she has said.

9. Reese is an avid activist for the fight against poverty.
The actress is an active member with the Children's Defense Fund, which helps fight child poverty by helping families reach social benefits. Reese became interested in the organization when she read a book the founder wrote, The Measure of Our Success. She has said about finding inspiration from the read: "It was before Legally Blonde, and I was having a hard time getting a job. There were all these questions about my weight, and I was asking myself, Why am I an actress? What is life about? So I started reading the book again, and I called the Children's Defense Fund to see if I could help."

10. The brainiac attended Stanford for one year.
Witherspoon enrolled at Stanford University in 1994 as an English literature major but only lasted for one year. She dropped out of the Ivy League to pursue acting and accepted roles for her first two major motion flicks, Fear and Freeway. They weren't box office knock-outs, but they helped spur her career. And she even told the New York Times in 1998 when she gets frustrated with acting, she sometimes considers becoming a doc. ''I say, 'This is it -- I'm going to med school!' I would love to be a pediatric surgeon."
nice to know right?!!!!
Posted by afowzocelebstar