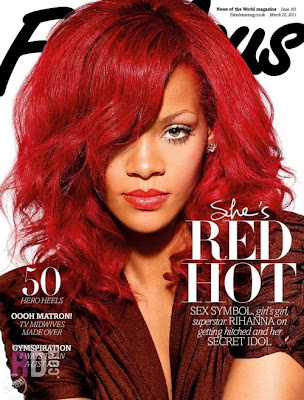 The vocal downplayed powerhouse talked with the publication about many a topic including her father’s drug addiction, her ‘loud’ hair, trying to better herself as a performer (…), her relationship with her mother, and more.

On her red hair:

“I think I was ready for something new and loud and expressive. It’s really adventurous. I wanted something that was fun, you know. I didn’t want a normal hair color. I’d had blonde, and it was so boring. Black is still my favorite, but I was looking for a color that was edgy. I guess it was just the place I was in at that time. I felt like being spontaneous, and I also wanted to go for something extreme. I couldn’t do green or purple or pink, so red was like the fine line between normal and extreme!”

On her childhood with an alleged crack-addict father who beat her mother:

“I have a lot of great memories, actually. Somehow, the negativity holds a very small space in my mind and memory. I usually just think about the great things, like the beach [in Barbados where she grew up], learning how to swim and write, and catching fish. And most of those things I did with my father. So I seem to just focus on that.”

On the influence her mother has had on her:

“My mother’s definitely had the most influence on me as a woman throughout my life. She raised me in a way that I could be responsible and fearless â€” she taught me a lot of things about life. She’s made me realize that it comes with consequences.”

“I never focus on who or what is at the top, because when people become better at what they do individually, it’s noticed. And that’s all I want to be: an artist who was known for growing constantly and becoming bigger and better. It’s not about who’s better between Rihanna, Katy Perry and Lady Gaga. I’m more in competition with myself. I always challenge myself to do better next time. It doesn’t matter who’s at the top as long as I’m getting closer to that point every time. That’s all I care about.”

“I have a lot more I want to do before I’m 30. I want to venture off as an entrepreneur and have my own fashion and make-up lines — just experiment with the things that I love. I’m a rebel. A rebel flower. And that’s girlie, but tough, too — there’s always that strength and vulnerability. There’s always something beautiful, but there’s still an edge.”

“I think what my fans enjoy about me are my flaws and imperfections. The fact that I’m rebellious and do things my way motivates them to be individuals. That’s all I care about, you know, people being themselves and living life to the fullest.”

On being called a sex symbol:

“Every time I hear that it’s definitely flattering, but also uncomfortable. That’s not a priority on my list – being a sex symbol or being overly sexy. I’m just a normal woman. I don’t really focus on being a sex symbol.”

“Maybe in the future, but that’s not on my agenda right now. No, I’m not ready for that.”

On the mere mention of Chris Brown’s name:

“You obviously want to talk about Chris Brown, I don’t.”
i like the interview and i think, contrary to popular demand, we may have an icon in our midst
Posted by afowzocelebstar