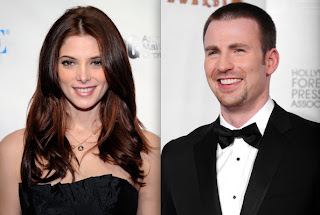 Ashley Greene isn't wasting any time moving on after her breakup with Joe Jonas—not that we blame her. Who wouldn't want to get chummy with the men in her circle?
A source told E!'s Ted Casablanca that Ashley got some one-on-one
time with Captain America hottie Chris Evans Tuesday evening at Trousdale. "Ashley was all over him, and he certainly didn't mind," a witness dished. "They were dancing together very closely. It looked like they had a lot of sexual chemistry."
But just last week, tongues were wagging that Greene had moved on with Kings of Leon bassist Jared Followill. Which could have been the case—last week. A friend explained, "Ashley is newly single. She's hot, of course she's going to be out having fun!" so i say have all the fun you can! just be safe and catch the right guy when he passes by!
Posted by afowzocelebstar