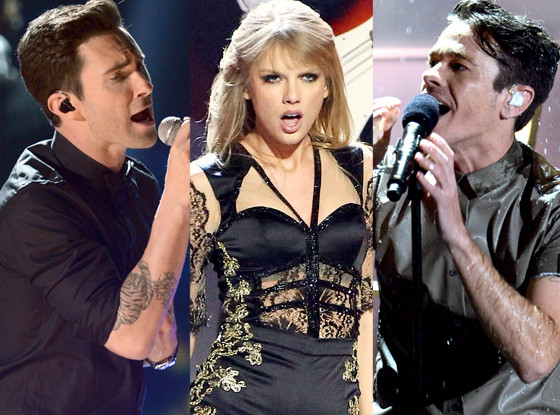 Taylor Swift, Maroon 5 and fun. lead the nominees at this year's Billboard Music Awards. The trio have all received 11 nominations for this year's awards ceremony, which will take place at the MGM Grand Garden Arena in Las Vegas on May 19. Swift and Maroon 5 are both nominated in the ...
'Top Artist' category and will compete against Rihanna, One Direction and Justin Bieber for the prize.
Meanwhile, fun. are nominated for 'Top Hot 100 Song' for their 2011 hit 'We Are Young'. They have also received nods in the 'Top Duo/Group' and 'Top Digital Songs Artist' categories.
Rihanna and Carly Rae Jepsen follow with ten and nine nominations respectively. One Direction have secured eight nominations, including two 'Top Pop Album' nominations for their LPs Up All Night and Take Me Home. Jepsen's hit single 'Call Me Maybe' earned her nine nominations alone with recognition in the 'Top Pop Song' and 'Top Radio Song' categories.
The awards have also recognized the increased popularity of dance music in the American market with EDM categories being included for this year's ceremony. David Guetta, Skrillex, Swedish House Mafia and deadmau5 will compete for the 'Top EDM Album' prize.
Prince will also be honoured at the ceremony next month. He will be presented with the 'Billboard Icon Award'. Tracy Morgan will host the ceremony this year, which includes performances from Bruno Mars, Taylor Swift and Justin Bieber. The Billboard 2013 Music Awards will air live on Sunday, May 19 beginning at 8/7c on ABC.