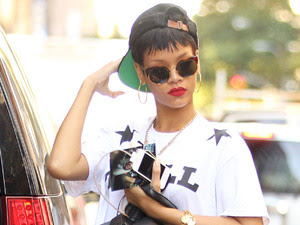 Rihanna has named her new album Seven, according to a release schedule. The Bajan star is expected to release her seventh studio album worldwide on November 19. The album title is listed on Hits Daily Double, who updated their Q4 release schedule earlier yesterday (October 4).
The date puts Rihanna up against ...
AC/DC, Keyshia Cole and Kid Rock in the US, while she'll face competition from Little Mix's debut album DNA in the UK.

The collection has been preceded by her new single 'Diamonds', which was released last week and has since entered Top 10 iTunes charts across the globe. Rihanna has yet to make a formal announcement regarding the album's title, but one is expected to come in the near future.
Posted by afowzocelebstar