Adele is not the Highest earner Under 30, who knew? 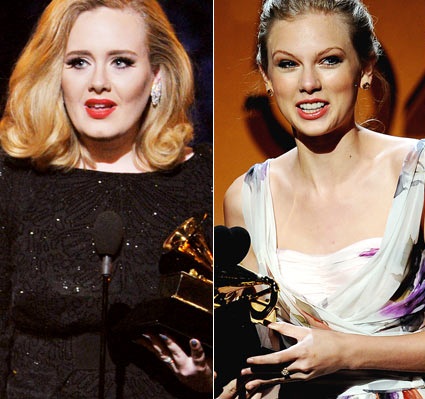 Adele's critically-acclaimed sophomore album 21 has been ruling the charts for well over a year now, but she still made less cash than a number of her poppy peers. Justin Bieber may have to dip into his buckets of gold to settle with a ...
woman who's suing him for destroying her hearing. Rob Zombie and Marilyn Manson are on a mission to bring evil back. Here's the news.
Taylor Swift is the top-earning celebrity under 30, Forbes reports. The country crossover queen reportedly raked in an impressive $57 million between May 2011 and 2012, giving her the freedom to live out the rest of her sparkly, dreamy life in a Disneyland castle populated with fuzzy wuzzy kittens, if she so desires. While Swift sold nowhere near the number of albums that British singer-songwriter Adele has moved, she augmented her income with tour ticket sales and lucrative licensing deals (fairy tale princess perfumes, basically).
Also a big earner: Justin Bieber, who pulled approximately $55 million. I've said it a thousand times: Never underestimate the power of the 13-year-old girl.
Only three non-musicians made the list: Kristen Stewart ($34.5 million), Taylor Lautner ($26.5 million), and Robert Pattinson ($28.5 million). Noticeably absent was performer Miley Cyrus, who put her music career on pause to work on a couple movies. Unfortunately, LOL only made $46,500 in its limited release earlier this year, and So Undercover has yet to be released.
Posted by afowzocelebstar