Video: Toni Braxton Gets Emotional When Speaking About Son’s Autism 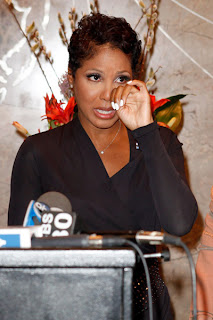 Toni Braxton shined a light on New York City during her visit to the Empire State Building today. The mother of two appeared with Autism Speaks co-founders Bob and Suzanne Wright to illuminate the Big Apple tower in blue to honor World Autism Awareness Month.

During the ceremony, the ...
star of WE tv’s “Braxton Family Values” got teary-eyed when speaking about her autistic son Diezel. “When I first found out he was autistic, I was a mess,” she recalled. “I blamed myself, I thought it was something I’d done. And out of nowhere, Suzanne Wright reached out to me and said, ‘You’re not a victim. And together, we’re gonna hold hands and we’re gonna walk through this and we’re gonna help your son Diezel.’”
Watch Toni’s emotional speech and see her “flip the switch” below.