Christina Aguilera: “I Want To Make A Rock Record” 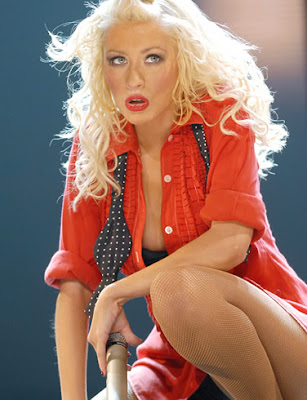 As Pop diva Christina Aguilera attempts to rebound after a tumultuous 2010, long-time collaborator Linda Perry has spoken up about the singer. The ‘Beautiful’ songwriter opened up in a recent interview about the singer’s nonchalant response to criticism, going against the label grain, and her acknowledging of mistakes made with chart catastrophe ‘Bionic’.…

Christina’s always had the bad rap. So, it’s not like this is happening all of a sudden… she’s always had it. That’s something between Christina, her fans, the public, and the energy of the world. That’s something only Christina and the energy can figure out what’s going on there. But, as far as I’ve known her, everybody’s always given her a hard time. She’s a different little bird. You know, she’s not really out a lot and when she does go out, people are gonna grab things. Like, is she running around as much as Britney Spears was a few years ago? No, she’s isn’t. But, when they catch her they catch her in whatever state she is in. I don’t know why the press is so hard on her right now. I think Christina’s awesome and a very talented person. She definitely doesn’t care and that is a fact. You know how some people say “I don’t care” and they really do? I can tell you that Christina really doesn’t care… because she learned very early on that critics are critics, people will say whatever they want and it’s up to her to decide what is the truth and what is not. She stands true to what she knows.
Like, she told me “I know this Bionic record is not going to be a big record because I’m gonna try and do some different things and I don’t know what’s gonna happen but this is what I wanna do” She knew that before she recorded one thing. She knew that about Back to Basics, too. Her record company came to her and said “you’re gonna sell way more many records if you make this a single album. Let’s get rid of the double record.” And she said, “No, this is how I hear it. I hear one record being like this and the other record being like this.” Everybody warned her that it’s not going to sell as much but she didn’t care because she comes up with creative ideas and stands behind them as an artist. It’s not all about selling a bazillion records to her. She just wants to be able to stand behind it. In the end she did say to me, “Maybe I did release the Bionic record too soon. Oh well. Now, I wanna make a rock record!” I was like “Oh, God!” She’s gonna take everybody for a ride. So, ultimately, why she gets put down I don’t know. You’ll never know, I’ll never know, only Christina will ever figure that out and get the answer. {Source}
Jury’s out on the prospect of a Christina Rock LP. However, given ‘Bionic’ wasn’t as awful as some made it out to be, it’s clear her career resuscitation will need to centre on more than just the music (see: image, public persona).
Posted by afowzocelebstar