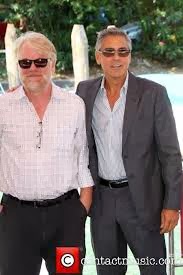 Before the Tuesday night world premiere of "The Monuments Men," George Clooney, the film's director and star, took a moment to remember Philip Seymour Hoffman.
"I wanted to start by saying it's very odd to be here in New York, particularly a couple of days after a good friend of ours has passed away," Clooney said to the crowd at New York's Ziegfeld Theater. "It makes it difficult, and I think it's the elephant in the room for a lot of us here."
Many of the film's stars, Cate Blanchett, Matt Damon, Bob Balaban and Clooney among them, had worked with Hoffman in some capacity before. (Clooney directed Hoffman in "The Ides of March," his last directorial effort before "The Monuments Men.") Hoffman died on Feb. 2 in his New York apartment following an apparent drug overdose.


"It's senseless and it's sad. But Phil will be greatly missed," Clooney said. "It's hard to be here tonight with that weighing over us. I just wanted to say that."
"The Monuments Men," which stars Clooney, Damon, Blanchett, Balaban, Bill Murray, Jean Dujardin and John Goodman, focuses on a group of art historians and soldiers tasked with preventing the Nazis from stealing and destroying great works of art at the end of World War II. Other famous faces spotted at the world premiere included Martha Stewart, Steven Soderbergh, Alfonso Cuaron, Sofia Coppola and Regis Philbin.
Posted by afowzocelebstar