Album Review: Capital Cities' "In A Tidal Wave Of Mystery" 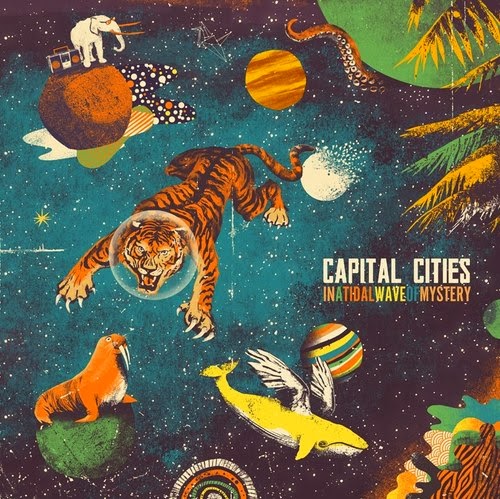 Tot the article was close to accurate! enjoy (by Jordan Webb)
I would be lying if I said there was an enormous amount of variety enveloped within this album, but for a debut album by the Los Angeles based band, it really isn’t that bad!
First and foremost, anybody that can include Andre 3000 on a record is bound to ...
produce a hit and for me, he features on the best track of the album. Farrah Fawcett Hair is an absolutely divine song and, as the lyrics state themselves, it’s good sh*t! An echoing  jazz trumpet on top of a bouncy bass guitar smoothly digresses into Andre 3000′s fleeting vocals and at this point, you are in love with this song! Some may say this is somewhat of an anomaly for Capital Cities, it’s a far cry from anything they have done in the past and presents a completely different group to the guys that create suave covers of timeless classics like Staying Alive and Nothing Compares To You.
Safe And Sound, a track that did very well for the group in 2011 charting all over the world, is for me the traditional Capital Cities sound. A pulsating synth reverberates throughout most of the track, adding that upbeat edge that the band so brilliantly captivates. Utilising the trumpet once more, Capital Cities provide a  well rounded musical edge, covering almost every scale of the electro-indie, alternative spectrum. I Sold My Bed, But Not My Stereo, again contains all of the above; bouncy melody, enigmatic synths and a tittering beat that is sure to make you tap your feet.
However, listening to the album as I write this, I seriously cannot stress the lack in depth and breadth throughout the album. With the exception of Farrah Fawcett Hair, it’s really tough to distinguish one track from another. Kangaroo Court, the groups next release, consists of every single element I’ve already listed, leaving me to feel as though this album is probably best listened to whilst shuffled amongst the rest of your iTunes library.
Having said that, there are two more songs that I have really begun to enjoy. Origami has a subtly dark edge to it. It’s a track void of the vibrancy and upbeat nature that the rest of the album possesses. With an edgy vocal of the word ‘origami’ on top of a bouncy melody, I can see this track being played in the early stages of a house party; it’s a rousing track and it means business.
Call me soppy, but Love Away is a downright beautiful song and I can hear an acoustic version being played at a wedding ceremony under an overgrown oak tree amongst a luscious backdrop. Soppiness over. But seriously, this is a heartfelt track that vibes me out every time I hear it. With a bridge  towards the end of the track containing a simple but satisfying guitar solo, it is a record that I can only describe as cute!
A pleasant surprise for me was Lazy Lies, a song that actually possesses a sense of The Beatles. It’s a hazy and charming record and a welcome change amongst a plethora of similar sounding tracks. All in all, this is an album that consists of a multitude of brilliant songs, many of which sadly sounded distinctly like the last. As I’ve already stated, for a debut album this isn’t at all a bad effort and, if I was to be really bold and push the boat out, I may go as far to say that Farrah Fawcett Hair could well be my favorite song of 2013 so far!