The Most Anticipated Albums Of 2013 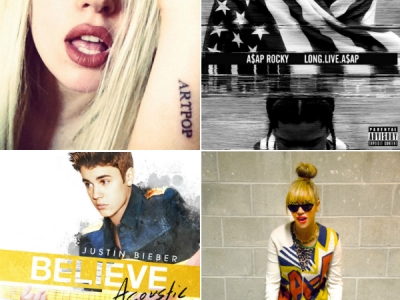 2012 was a strange year for pop music. Many of the year’s best albums snuck up on us (Miguel, Frank Ocean, Fiona Apple), pushing aside “event” albums from megastars like Madonna and Christina Aguilera. (Taylor Swift held up her end of the deal, though.) Meanwhile, a handful of singles from virtual nobodies had the whole world singing in unison. But 2013 could mark the return of the Established Pop Juggernaut, thanks to new releases from Beyonce and Lady Gaga, a credibility grab by Justin Bieber and the return of Eminem, Paramore and Miley Cyrus. We don’t know how it will all shake out (besides the inevitable KimYe baby song), but below are the 13 pop albums we can’t wait to hear in 2013.

After being snubbed by the Grammys, Justin Bieber is taking on 2013 with a chip on his shoulder. And you don’t want to see Biebs when he’s angry (because then he’ll grab the acoustic guitar and make you melt ..... biliebers that is). Believe: Acoustic was supposed to be an eight-track EP, but Bieber said that wasn’t enough, so he added two more (possibly new) songs. Add to that the mysterious “Track 8″ and the rumors of an Ed Sheeran collaboration

Sasha Fierce may be Beyonce’s amazing alter ego, but Beyonce is the alter ego of fierce women everywhere. (See: The Mindy Project, episode “Danny Castellano Is My Gynecologist” wherein Mindy chooses “Beyonce Pad Thai” as her “warrior name”). Yes, 4 was one of our favorite albums of 2011. Yes, we have watched her live performances of “Run The World (Girls)” and “End Of Time” an absurd number of times each — but that’s not the only reason we’re jumping out of our skin with excitement over her new music. So far Bey has hit the studio with: Hit-Boy, Kanye West, Ryan Tedder, The-Dream, Ne-Yo (go back and listen to the gentleman’s gem that is “Nobody”) and Miguel. Whatever she’s cooking up will be revealed in the most mind-blowing fashion during her Super Bowl spectacular. Jay-Z and Kanye watched the throne, now it’s time for King B to reclaim it.

A quasi-feminist sex romp called “G.U.Y. (Girl Under You)”, a “Telephone” sequel, apps, trap music and two volumes — all combining into what Lady Gaga says is a “very risky” assault on “your mind, ears, body.” It sounds like an over-the-top mess, but then, when has a description of a Gaga endeavor not sounded like an over-the-top mess? Mother Monster is at her best and most monstrous when she’s at her most theatrical and grandiose, so we’ll (excitedly) defer to her here.

After the stale fart that was Relapse, Em dropped Recovery, a return to form that found him harnessing the playfully sinister restlessness that came to mark his earlier work. We don’t know much about the record, but we do know he announced its existence via a snapback, which immediately caused hip-hop nerds to squee. And hip-hop nerds never squee.

By the time The Wanted‘s first US album sees the light of day, the boy band will have grown into a man band. Word has it the “Glad You Came” crooners’ LP will finally arrive in early spring (and will be called Third Strike in their home country of the UK, given that it’ll be their third release there). Previous singles included will be “Chasing The Sun” and “I Found You,” while collabs with Chris Brown (“Loverboy”), Rita Ora (“Mastermind”) and LMFAO (“The Club’s On Fire”) also made the cut.

Few mainstream pop records are as hotly anticipated in 2013 as Miley Cyrus’ untitled fourth LP, especially given the surprising list of collaborators with whom she’s hit the studio: Pharrell Williams, Hit-Boy and maybe even cameos from rappers Meek Mill and Tyler, The Creator. From her punked-out performance of “Rebel Yell” on VH1 Divas to the stripped-bare country-folk she showcased in her Backyard Sessions performances, Cyrus has covered the sonic map this year, with a thrilling disregard for, y’know, cohesion. While Pharrell said that Cyrus’ current sound is her personality — that is, far-reaching and eclectic — Cyrus promised “a dirty South hip-hop feel” with influences of vintage soul. In short, expect the unexpected.

A$AP Rocky recently went Kid Cudi on everyone, telling NME he thinks with Long.Live.A$AP he has made “the best fucking record ever.” After hearing “1 Train,” “Fuckin’ Problems” and “Wild For The Night,” that statement sounds far less ludicrous than it should. By the time he joins Rihanna on her Diamonds tour, the singer could be passing the torch from the Year of Rihanna to the Year of Rocky.

Mimi’s 14th (!) studio album didn’t exactly get off to a great start after lead single “Triumphant (Get ‘Em)” flopped harder than a half-full champagne flute crashing against the fireplace this past summer. Still, Carey has her stint as a judge on the upcoming 12th season (!!) of American Idol as career-boost backup before her new record is released. Mariah has said she’s been working on the album with some of her “favorite people”. Let’s just hope the results are more The Emancipation Of Mimi and less Memoirs Of An Imperfect Angel.

She was made of glass and paper in 2011, but 2013 might just find Lovato made of platinum: The Disney princess-turned-The X Factor judgestress, who had one of 2012′s best singles with “Give Your Heart a Break,” promises to up the ante with her fourth studio album, due next year. While details remain scarce, songwriter Emanuel Kiriakou (who penned “Who Says” for labelmate Selena Gomez) confirmed that he’d written “several songs” with the chanteuse, and Lovato promised in an interview that the sound will be more organic. “No dubstep for me, I’m good,” she said. “I miss hearing real instruments on the radio — I want to be able to bring that back to pop radio.” A new single expected sometime this spring should leave her winning streak unbroken.

Another teen-pop diva with a Disney pedigree is tipped for a big comeback in 2013: Selena Gomez, who’s always done dance better than her contemporaries. (Seriously, who could best “Naturally” or “Love You Like A Love Song”?) She, too, has been tight-lipped about the upcoming LP’s direction, saying only that it will “sound very different” and she plans to “tell a story” and “write about things I’ve never talked about before” — although plans to reunite with producers Rock Mafia and Toby Gad are in the works. We’ll cross our fingers for songs about the Biebs.

Sister act Tegan and Sara Quin enlisted the pop expertise of Greg Kurstin for production duties on half of this, their seventh album. The results are both surprising and refreshing, and if there’s any pop justice in the world, this synthy set will be the one to finally break this duo through to the mainstream in a big way. First single “Closer” was just a taste; other gems lying in wait include the ’80s-tinged jams “Goodbye, Goodbye” and “Drove Me Wild,” soaring mid-tempo ballad “I Was A Fool” and the shimmery heart-tugger “How Come You Don’t Want Me.”

In the past 12 months, Lil Wayne has lost a lawsuit to the tune of $2 million, suffered two seizures aboard airplanes, had beef with Pusha T and dealt with the fallout of Nicki Minaj’s myriad feuds and Drake‘s bar brawl with Breezy. This is all great fodder for a record. And this album has been delayed so much that we’re optimistic Weezy was able to work all of that drama into the lyrics. After Rick Ross‘ mid-flight seizures and a handful of beefs, Rozay turned out the best album of his career. Let’s hope Weezy recovers with an equally clean bill of health and a similar level of creative inspiration.

Hayley Williams and Co. said it themselves, they’re ready to “rise from the ashes” with their fourth album. Judging by the band’s statement, this record isn’t just a comeback. There may be fewer members now, but after bandying about terms like “new territory,” “liberate” and “movement,” this is clearly Paramore’s biggest effort yet.

Which is your most-anticipated release of 2013? Tell me in the comments below
Posted by afowzocelebstar