Mariah Carey: Nicki Minaj threatened to shoot me on the set of 'American Idol' 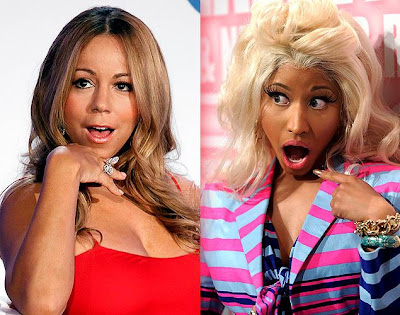 It was no “Idol” threat. Nicki Minaj said she wanted to shoot Mariah Carey on the set of “American Idol” — and Carey felt so frightened that she hired extra security, the “Dreamlover” singer revealed Thursday.


Veteran journalist Barbara Walters said on “The View” that Carey shared the new details about the feud that has roiled — or energized, depending on your perspective — the set of the creaky reality show, now in its 12th year.
“She said that when Nicki walked off the set, multiple people heard Nicki say, ‘If I had a gun I would shoot the b—h,’” Walters relayed.
Several “Idol” staffers, including hairdressers and producers, heard it, too, Carey told Walters.
“She said she’s very concerned,” Walters continued. “She doesn’t feel that anything would happen, but Nicki is unpredictable, and Mariah says she can’t take a chance and she has hired extra security.”
Carey added that Minaj has not apologized for the Tuesday blowup, which centered on a dispute over a contestant’s talent.
But Minaj did tell Carey, “I love you, but we might fight again,” Walters said.
American Idol host Ryan Seacrest, center, poses with judges, from left, Mariah Carey, Keith Urban, Nicki Minaj and Randy Jackson during more civil times.FOX had no comment Thursday. Earlier in the week, an “Idol” producer denied that there had been a death threat.
Minaj’s camp did not respond to requests for comment after Walters aired Carey’s grievances, but she did fire back on Twitter Thursday, suggesting that Walters is no impartial referee in the Battle of the Pop Divas.
“Barbara walters didn’t reach out from our team,” Minaj tweeted. “I guess we’re too dangerous.
“She also added, “I don’t call tmz n Barbara Walters cuz I stand on my own two feet,” she added, referring to a gossip website. “Never needed an army. God is good. Insecurity is as cruel as the grave.”
Later, she ramped up her online assault on Carey.
“I guess it hurts 2 have the producers tell u to ur face that nicki is the best judge we've had since simon,” Minaj added. “Awww, poor u. Keep them lies cmn.” as i earlier blogged, A camera captured part of the blowout, with video showing Minaj waiving her hands and shouting, “I told them I'm not f—-in' putting up with her f——king highness over there. Figure it the f--k out. Figure it out.” Carey fought back, but it is unclear what she said. Minaj also believes “American Idol” producers goaded Carey into starting a smackdown on the talent show’s set, TMZ reported.
Sources connected with Minaj told the site producers and members of Carey’s team are conspiring against her because they think a disgruntled Minaj will bring in viewers. this is low if american idol is using this to get ratings cause everybody would be tuning in to see a smack down  its funny cause some years back, these two divas collaborated on a song and they looked so good together in the video and to get to this place now is just not the way things should go. But i have to say if i were feeling someone was trying to show off, id be pissed too cause at the idol job, they are both equals so leave your high handedness at the door. They should both use the publicity for something positive then bury the hatchet honestly.

P.S. Da brat should shut the hell up, this aint your fight sister cause its about relevant people not has beens