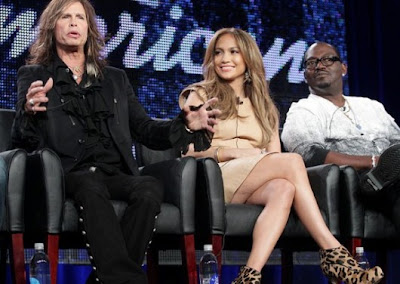 Steven Tyler is leaving "American Idol" after a two-season run as judge, Fox announced yesterday (July 12). "After some long, hard thoughts, I've decided it's time for me to let go of my mistress 'American Idol' before she boils my rabbit," Tyler, who judged seasons 10 and 11 of the reality show, said in a statement. "I strayed from ...
my first love, Aerosmith, and I'm back. ... The next few years are going to be dedicated to kicking some serious ass."
"Idol" creator and ep Simon Fuller said that the show will miss Tyler, but "I completely understand his desire to get back to his life as the singer in America's greatest-ever rock band."
Fox has yet to make an announcement regarding the futures of the other "Idol" judges, Jennifer Lopez and Randy Jackson, both of whom are still reportedly in contract negotiations.
When J. Lo stopped by NBC's "Today" show Thursday morning, she revealed that she has still not made up her mind about her involvement in "Idol's" 12th season -- although it sounds as if she's leaning toward ending her run on the Fox reality smash, which returns in January. "I've just enjoyed it so much. But I am thinking that maybe it's time for me to go and do other things that I really love to do… but then again, I really love the show!" she laughed.
Tyler and Lopez both joined the reality series in 2010, after Simon Cowell -- along with short-term judges Kara DioGuardi and Ellen DeGeneres -- left the show between seasons nine and 10.
Mike Darnell, president of alternative entertainment at Fox, said that it has been a "tremendous honor" to have Steven on the show. "We are very sad that Steven has chosen to focus more on his music," said Darnell, "but we always knew when we hired a rock 'n' roll legend, he would go back to the music." Fox would love to see Tyler back on the show in the future, he added.
In recent weeks, the rumor mill has churned out a number of potential judges for the show's next season, with former "Idol" competitor Adam Lambert thrown in the mix just a few days ago. In a statement issued Monday, Lambert said that if "Idol" wanted to talk to him about judging, he'd "be more than flattered to have that conversation." i can imagine you would Adam! go and get serious with "Tresspassing" because if the hot record just goes to waste, itll be your fault
Posted by afowzocelebstar