"Sex Me Up Rihanna" Adele Chimes 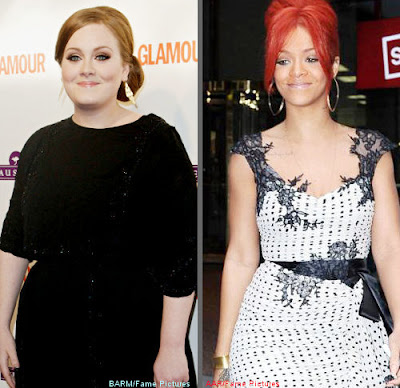 British singer Adele has won two Grammy Awards, kept pace with The Beatles in terms of chart domination, and otherwise received everything a pop star could ask for in life. What she hasn't had -- yet anyway -- is sex with Rihanna. Though, she's definitely up for it.

Adele and Rihanna have a ....
lot in common. They're both 23-years-old, have already made music history (Rihanna just became the fastest Billboard artist to ever record 10 No. 1 singles), and they share British roots, seeing as Barbados was once a colony of the crown. Put all this together, and the only natural result should be a sexual encounter.
Speaking with the Sun, Adele tempered her desires, explaining that she wouldn't want to force sex on the Barbadian star: "If Rihanna wanted me, I'd do it with her. She's hot."
Remember that this is the same girl who confessed to loving Katy Perry, as well as Lady Gaga's boobs and butt. So, perhaps Adele is getting ahead of herself. But whatever the case, we can't wait to hear Rihanna's reply! its gonna be S&M-epic
Posted by afowzocelebstar