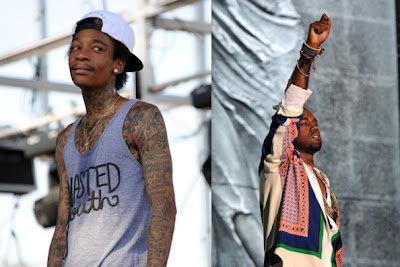 There has been no shortage of bogus, overblown beefs in the rap world. But few rumored rivalries are quite so sexy as the one that's supposedly cropped up between up-and-comer Wiz Khalifa and industry stalwart Kanye West—mostly because it's all over an often scantily clad model.

According to MediaTakeOut, the pair exchanged ....
words backstage at the Coachella Music Festival in Indio, California.
The supposed incident started when Kanye modified some lyrics from his hit "Stronger" to include the line, "I did anything for that blond d**e/ And she did anything when the time's right," causing many in the crowd to speculate it was a thinly veiled dig at his ex, model Amber Rose. The problem? Rose was in the crowd with her new beau, "Black and Yellow" rapper Wiz.
Afterwards, sources claim, Wiz confronted West about the lyrics, explaining, "Wiz didn't want to fight, he just wanted all this catty bulls**t to end."
But the source says that there was no peace made. "Kanye said something to Wiz and next thing you know security and people's entourages were everywhere pushing and shoving. It could have got real ugly."
The story ends with West being swept away by security. But we're having trouble believing it—Amber Rose's head would have exploded from all the attention. What's more, it sounds like Wiz has been too busy to get all hot and bothered; He tweeted Sunday, "been waken...baken...and all that s**t. tweetin from a 48 inch television. f**k iz up?"
Posted by afowzocelebstar