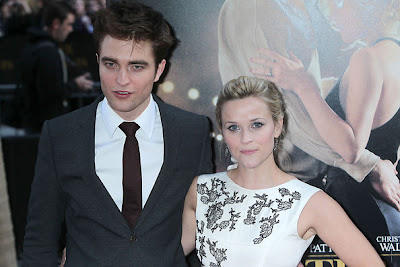 Reese Witherspoon definitely felt like second fiddle to Water for Elephants co-star Robert Pattinson last night at the film's New York City premiere. The fans go absolutely nuts for the Twilight actor, and Reese is more like the "consolation prize," as she says.

Reese stars alongside the Twilight actor in the new movie and when they both ...
showed up at the Ziegfeld Theatre in New York City, she said she could tell the hoards of fans weren't exactly waiting for her. She said: “Rob’s fans are very dedicated to him and they will turn out anywhere for him. I think I’m just the consolation prize for them!”
Even though the screaming teenage girls are there to see the handsome actor, Reese still thinks it's important to interact with fans. She said: "I think it's incredible because as movie actors we sort of work isolated and we don't get to see fans as often, so it's a nice experience to actually get to meet some of them and know they're excited for the film."
Luckily for fans, Rob made it to NYC just in time for the premiere after having to fly from the Twilight: Breaking Dawn set in Vancouver, Canada to get there. He said at the premiere: "It was a mad rush to get here.”
Other stars to attend the premiere included Robert and Reese’s fellow co-stars Christoph Waltz and Hal Holbrook.
Posted by afowzocelebstar