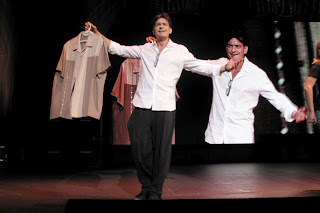 So, Charlie Sheen may not be "winning" after all. The actor was apparently booed by the audience at his kickoff live show, Charlie Sheen LIVE: My Violent Torpedo of Truth, at the Fox Theater in Detriot last night!

The show reportedly got off to a shaky start, with the audience booing his opening act, and then Charlie took the stage and the audience reactions didn't seem to improve much.
The former Two and a Half Men star supposedly just ...
ranted nonsensically for a while, talking about drugs and porn stars for most of the evening. "I figured Detroit was a good place to tell some crack stories," he said, before asking the audience (via People.com) "Show of hands – who here has tried crack? Forget that. Who is holding crack right now? I don't do crack anymore, but I'm just saying."
He was only on the stage for about an hour, and even skipped telling some of the stories he'd planned to because of the negative audience reaction -- people even started walking out!
Despite some obvious negativity from the crowd, Charlie still posted a pic of a cheering crowd on his Twitter, writing: "The most honest city in the world honors the most honest man in the universe #TruthTorpedo."
TMZ reports that the rest of his tour is a up in the air now, and people in other cities are trying to sell their tickets in light of the poor reviews coming out of Detroit. His next show is scheduled to be in Chicago Sunday night, and there are reportedly 200-300 seats now available.
Posted by afowzocelebstar