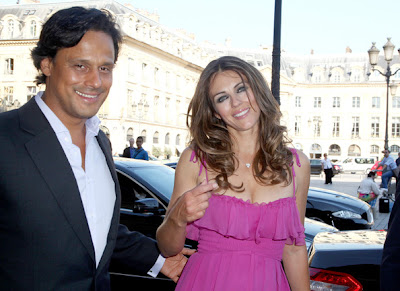 Elizabeth Hurley has reportedly filed for divorce from her estranged husband Arun Nayer. The actress split from her hubby of four years last year, and apparently divorce papers were filed at London’s High Court yesterday.

Reports say Liz cited ...
"irresponsible behavior" as her reason for ending the marriage, but it was her actions that were in the headlines in Decemeber 2010, when she appeared to be dating a cricket player named Shane Warne.
She tweeted at the time: "Painful, sad days. Arun & I separated for private reasons but FTR (for the record) he has been a great father to our son Damian & will always be in his life."
At the time, she claimed there were no plans for officially ending the marriage. She wrote: "Bored now of silly speculations: no one is divorcing anyone yet, no one is fighting over money and I have no plans to go to Australia. Enough!"
Just recently the model took to Twitter again to address new rumors that she and Warne were planning to get hitched. "Apparently I'm getting married & moving to Australia," she wrote earlier in the week. "Wow, my fictional tabloid life is exciting! Breathlessly awaiting next installment..."
Posted by afowzocelebstar