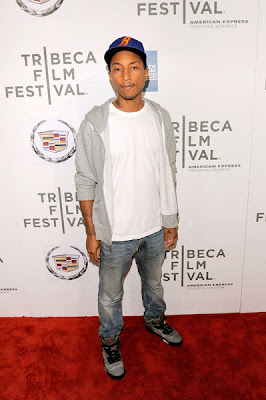 First of all, any Skate-Board P News is FIRE!!! (he is too good a producer and his appeal is madness!!! a white dude in a black mans body with eastern creativity ... whAT ami saying lol!!!!)
Pharrell breezed through the premiere of the documentary ...
Beats, Rhymes & Life: The Travels of A Tribe Called Quest during the 2011 Tribeca Film Festival, dressed casually in a gray hoodie, white tee, jeans, BBC hat, and Jordans. The Neptunes producer, who’s been in the studio with Gloria Estefan, Odd Future, and Rye Rye, later attended the swanky Vanity Fair party at NYC’s State Supreme Courthouse.

Despite his partnership with textile company Return Textiles, which creates clothes from recycled bottles, Skateboard P recently told The Associated Press that he wasn’t eco-conscious growing up and still struggles to be. Surprised? we black people so not so suprising cause we usually dont give a damn! but we gotta now that the world is in danger cause of our "not caring" (9ja peeps take note lol)
Posted by afowzocelebstar