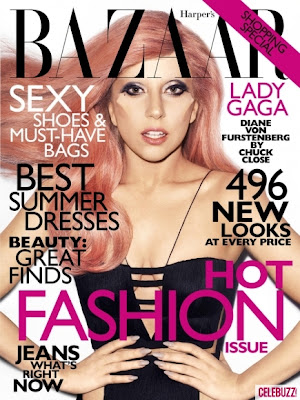 (here we go! love u but sometimes i gotta ask what the heck is going on in your head [listening to BoysBoysBoys now lol!])
Lady Gaga says she did not write her latest hit song, "Born This Way," but rather the late British fashion designer Alexander McQueen did so when he channeled it through her from beyond the grave.
Gaga told Harper's Bazaar magazine that McQueen, who ...
committed suicide by hanging on February 11, 2010, "planned the whole thing: Right after he died, I wrote 'Born This Way.' I think he's up in heaven with fashion strings in his hands, marionetting away, planning this whole thing.'"
When the singer's label decided to release the "Born This Way" single on the exact one-year anniversary of McQueen's death, Gaga said it confirmed her belief that the British designer was working through her.
It was not she who wrote the song, Gaga said. "He did!", she told the magazine in an interview for its May edition.
McQueen, 40, and Gaga were close friends. The singer wore his iconic lobster-claw shoes in her "Bad Romance" music video and paid emotional tribute to him in a performance at the BRIT Awards in London a week after his death.
In a fashion spread for the magazine, Gaga sports her new trademark "facial horns" -- spikes on her face that appear to be protruding from beneath her skin.
The bizarre bumps, also on her shoulders, have been part of a new look ever since she debuted the "Born This Way" single at the Grammy Awards in February, leading to speculation that Gaga either had plastic surgery or is wearing prosthetics.
"I have never had plastic surgery," Gaga said. She said the protrusions are "not prosthetics, they're my bones."
The singer insisted the bones have always been inside her, adding: "I have been waiting for the right time to reveal to the universe who I truly am."
Gaga, known for stunts like setting her piano on fire and wearing a raw meat dress, went on to say that the bones "come out when I'm inspired" and that everyone has them because they are "the light from inside of us."
Posted by afowzocelebstar