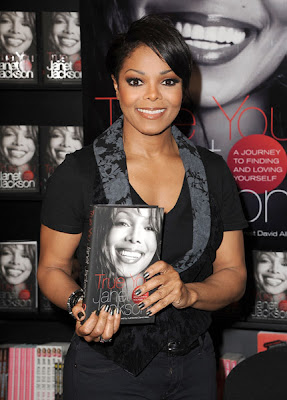 Janet Jackson promoted her New York Times No. 1 bestseller True You: A Guide to Finding and Loving Yourself with an in-store appearance at Book Soup in West Hollywood on Friday (April 15). Dressed in dark denim, knee-high boots, and a short-sleeve top, the cropped-haired superstar signed copies of her self-help book and posed for photos.

The night before, the pop icon ...
performed at the Gibson Amphitheatre to a packed house. Her brother Jermaine and mother Katherine were in the audience, receiving a standing ovation when they entered.
Janet will play another show in L.A. tonight and one on Saturday. Her “Number Ones: Up Close and Personal Tour” has been extended until the fall, with more North American dates to be announced.
Posted by afowzocelebstar