The Voice: An Insider Look 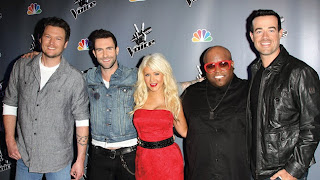 American Idol’s dominance in the talent-show sphere has been, for the most part, unchallenged, but Mark Burnett is hoping to change that in April — or at least dent it a bit — when NBC premieres The Voice.

The series’ premise is basically the same -- a natural talent gets a chance to be heard and discovered -- but the process of finding that talent has been
fine-tuned. Rather than cattle-call-style auditions at 20,000-seat arenas, an A&R team for Voice was deployed with a very specific singing star in mind.
"The Voice is looking for individual singers that are ARTISTS, preferably no singer-songwriters or divas," read an e-mail from a Voice scout in January, as the team was setting up one-on-one appointments. "We got plenty of both, so that didn’t work," Burnett scoffs. (To be fair, the show also held an open call.)
The show’s concept was imported from Europe, where The Voice of Holland draws a healthy 3 million viewers (the Netherlands’ population is 16.5 million), and as the latest David to Idol’s Goliath, it is prepping to rival the ratings behemoth directly (the show premieres April 26 as Idol gears up for its final shows).
Star power? Check. Christina Aguilera, Cee-Lo Green, Blake Shelton and Adam Levine have signed on as celebrity coaches ("Judges," Levine says, "is kind of a dirty word around here”) in a reality-show twist that gives a nod to Simon Cowell’s The X Factor (the contestants choose a mentor with whom to work, pitting the celebrities against one another). Host with music cred? Hired. MTV and late-night vet Carson Daly will fill the emcee role. Reality-TV pedigree? Covered with Burnett.
After 13 weeks of competition, the winner receives a $100,000 recording contract with Universal Republic (a paltry sum compared with X Factor’s promised $5 million deal) and a management deal with Sanctuary Management Group, which represents Fleetwood Mac and Velvet Revolver (it will take a 25% cut, according to a source).
But though the show’s producers and stars are making every effort to differentiate Voice from Idol, mainly emphasizing its format — auditions where the coaches can’t see the singer; who advances is based purely on their singing voice — it’s not cowering from the primetime powerhouse, either. Declared Daly during Voice’s first press conference: "The level of talent is leaps and bounds beyond the winners of any other competition show."
Posted by afowzocelebstar