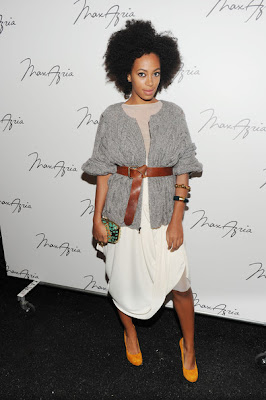 It’s been a minute since we’ve heard anything from Beyonce's little sister, Solange; however, the youngest of the Knowles clan has been busying herself with many projects. Indeed, as well as recording her third studio album, the 24 year old joined forces with Twin Shadow and Chris Taylor (of the Grizzly Bears) to record charitable track ‘Kenya’.

The release is designed to generate awareness of the world’s water crisis, benefitting charitable efforts of Coca-Cola Africa Foundation’s RAIN (Replenishing Africa Initiative). Proceeds from the track will be used to establish clean water standards for a number of African countries such as Uganda, Cameroon, and Rwanda.
Speaking of the record, Solange said: “To me it inspires hope when it’s more upbeat and spirited, and I think that that is what the conversation should be about. Lovely, just lovely so keep doing you girl!
Posted by afowzocelebstar

Email ThisBlogThis!Share to TwitterShare to FacebookShare to Pinterest
Labels: Solange