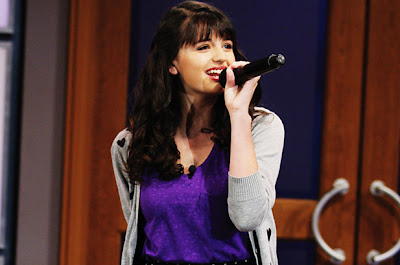 We probably haven't heard the last of the YouTube phenom.
Black, 13, has been in the eye of a media hurricane thanks to the viral spread of her party song "Friday," which had racked up a mind-boggling 44 million views on YouTube at press time-compared with 24.5 million views for the video of Lady Gaga's Billboard Hot 100 chart-topper "Born This Way."
"Friday," which was written and produced by Ark Music Factory of Los Angeles, has been ridiculed mercilessly in the mainstream press and the blogosphere as a cheesy joke.
But Black may wind up having the last laugh.

After generating first-week U.S. digital track sales of 37,000, according to Nielsen SoundScan, "Friday" debuts this week at No. 72 on the Hot 100. And the eighth grader has made appearances on "Good Morning America" and "The Tonight Show With Jay Leno" demonstrating admirable poise and a sweet appeal.
Meanwhile, Black and her family have been plotting her next move, hiring a lawyer, a publicist and, perhaps most tellingly, a manager -- John McEntee, president of TEI Entertainment in Anaheim, Calif. TEI provides headliners for corporate events held by Fortune 500 companies but McEntee says he took on management responsibilities independent of his company.
In the span of a week, McEntee's team registered the URL RebeccaBlackOnline.com through GoDaddy.com and built a website with all the requisite trappings of an artist home page, including a brief bio, photos and embedded videoclips of her "Tonight Show" appearance, her "Friday" video, an iTunes link to buy the single and an invitation to join her fan club.
"Record labels have been contacting myself and Ark Music directly about Rebecca," McEntee says, declining to disclose names. "There is definitely interest from real record labels. They've found out she can sing. With all this exposure, we're looking at her coming out with more songs and an album. We've been getting submissions from a lot of fantastic songwriters. That's a good sign."
But Black, who didn't respond to requests for comment sent to her mother's e-mail address, faces significant hurdles if she wants to be something more than a novelty act.
Guy Zapoleon, president of radio consultancy Zapoleon Media Strategies, says he doesn't expect "Friday" to transcend its online popularity. "Songs that are a hit on social media," he says, "don't necessarily become radio hits."
Indeed, during the March 16-22 tracking week, "Friday" generated a mere 12 plays at only 11 stations of the more than 1,200 monitored by Nielsen BDS for the Hot 100.
"While the lyrics are cheesy, the melody isn't that bad," Zapoleon says. "Younger teens, who aren't elitist about how they look at music, are accepting of songs like 'Friday.' "
Still a bit of a mystery is the Ark Music Factory, the company that produced "Friday." On its website (arkmusicfactory.com), the company describes itself as a record label and a social community for musicians, bands and producers.
In addition to Black, its current artist roster contains seven additional acts, including Amanda Williams, Abby Victor, Pato and Alana Lee, touted as "the girl who introduced Rebecca Black to Ark Music" and whose own single, "Butterflies," sold 3,000 digital tracks in the week ended March 20. "Friday" co-writer Clarence Jey, who appears to be a principal at Ark Music, declined to be interviewed.
"The whole Ark Music team is giving kids a chance to make their own video with original songs, putting them up on YouTube and seeing what happens," he says, adding that "it's a great formula-they are filling a niche that no one else is doing for these hopeful next pop stars."
Black's journey to stardom began Feb. 10 when the "Friday" video was uploaded to YouTube. Online buzz didn't start generating until four weeks later, judging from Twitter history available at Google Realtime.
On March 21, E! Online and CNN Showbiz both covered online reaction to the song. Then came mentions by popular blogs like Just Jared and Defamer. Awareness was further heightened with the help of varied and influential voices like Conan O'Brien's Team Coco, Hipster Runoff, Salon, the Telegraph and Daily Candy.
By March 24, TubeMogul estimated that 4,885 "Friday" mash-ups, unofficial versions and video responses had received 49.5 million views-a few million more than the official clip. The awareness captured by "Friday" exceeded some YouTube stars. The video's 35.6 million views in its first 40 days bested four of the top videos of 2010, according to TubeMogul: Rihanna's "Rude Boy" (28 million in its first 40 days) and Justin Bieber's "Never Say Never" (31 million), "Somebody to Love" (32 million) and "One Time" (28 million).
"We're having fun," McEntee says, "and seeing where this goes until we're told otherwise."
Posted by afowzocelebstar