Miley Cyrus Is Not Down with Rebecca Black 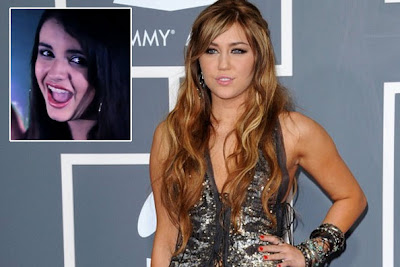 Since achieving overnight YouTube fame for her video of "Friday," Rebecca Black has been praised by the likes of Lady Gaga and Simon Cowell. But she has at least one famous detractor in Miley Cyrus.

Miley, who ...
is busy touring behind her most recent album, Can't Be Tamed, is apparently not impressed with the 13-year-old's heavily autotuned single.
"It should be harder to be an artist," Miley told Australia's Daily Telegraph . "You shouldn't just be able to put a song on YouTube and go out on tour."
Last week, Forbes revealed that Rebecca is indeed in the black. Her single, which cost her parents $2,000 to produce through Ark Music Factory, has likely earned her nearly $1 million since it was first placed on YouTube and iTunes. true but what can you do miley?
Posted by afowzocelebstar