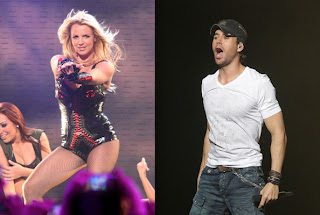 On Tuesday morning, Britney Spears announced on national television that she and Enrique Iglesias were to embark on a tour of North America. Just a few hours later, Iglesias pulled his name from the show. What gives?

If you believe TMZ, Enrique's ego....
may be to blame for the change of heart.
Sources claim Iglesias felt he was being perceived as an opener. When you tour with a media sensation like Britney Spears, it's got to be hard to feel like you're on equal footing. Especially if she's the one who closes the show.
There may be hope yet for a Britney/Enrique tour yet: A source told Billboard that the artists' respective teams are in the process of renegotiation. grab this as fast as u can cause it dosnt come errday Enrique!
Posted by afowzocelebstar