Kate Middleton Has Her Bachelorette Party! 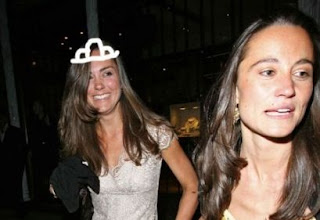 Kate Middleton has reportedly already celebrated her bachelorette party - in honor of her upcoming Royal nuptials to Prince William - but unfortunately, the bride-to-be's big ...
night out as a single woman was behind closed doors at a private party with only a small group of close friends!

Sources report that her younger sister Pippa, who is the maid of honor, organized the party, which took place at a friend's house a few nights ago!
The insider explains:
'She has already had her hen night, but it was certainly low-key. There isn't such a tradition attached to hen nights as there is to stag parties. It was done privately. Not all of Kate's friends were there and she will be catching up with other friends over the coming weeks.'
congrats all the same
Posted by afowzocelebstar