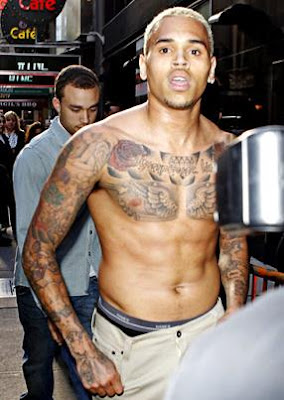 This morning, Chris Brown became out-of-control after his Good Morning America interview because the reporter asked him questions about his violent attack on Rihanna. Obviously, he had hoped the world had finally moved on from his abusive past, but when it was clear they hadn't, he gave us all something new to dwell on. He trashed his dressing room, broke ....
a window, tore off his shirt and stormed out without finishing his scheduled appearance.

Well! If that doesn't scream, "I've grown as a person," we don't know what will!
Following the incident, Chris took to his Twitter to send out an angry message to his followers about what had just happened. He tweeted, then deleted the following:
added;

"I'm so over people bringing this past sh*t up!!! Yet we praise Charlie sheen and other celebs for there bullsh*t."

We're not saying it's right either…but it also isn't right to get MORE violent over it. Life is unfair. DEAL WITH IT!
As we said, the tweet was quickly taken down, but there is a message still posted on his page in the aftermath of his outburst. Chris added:
"All my fans!!! This album is for you and only you!!! I'm so tired of everyone else!! Honestly!! I love team breezy!!"
Get a grip oh! iv heared this album an i think it could be the turning point that we need Team Breazy! just play calm and sensible ok!
Posted by afowzocelebstar