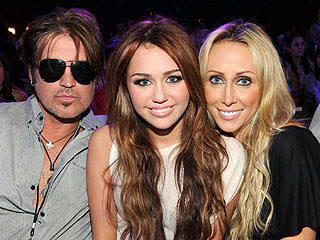 How do you mend an achy breaky heart? Billy Ray Cyrus says he's doing everything he can.  "I've dropped the divorce," Cyrus, 49, said during an interview on The View scheduled to air on Friday. "I want to put my family back together … Things are the best they've ever been."  "I feel like I got my Miley back," he added during Thursday's taping. "I feel like we're the daddy and daughter we were before Hannah Montana."  But the last few months have not been easy for Cyrus.  In October, he and wife Tish issued a joint statement announcing plans to end their 17-year marriage. A few months later, a startling video went viral of the couple's daughter, Miley, smoking natural herb salvia out of a bong.  Then, in an unguarded interview with GQ, he blamed Hannah Montana for "destroying my family," and said he felt Miley surrounded herself with people who put her "in a great deal of danger."  At the time, Billy Ray also told PEOPLE he was doing everything he could to find family unity again, saying in an exclusive statement, "It is very important to me to work on mending my family right now."  Even now, Cyrus still maintains his family would be in a better place if Miley didn't become a celebrity.  "Hannah Montana didn't ruin my family," he said during the View taping Thursday. "Fame did."  "Sometimes when you get in this ride," he said, "you feel like you're strapped to a rocket." Get ur house in order!
Posted by afowzocelebstar