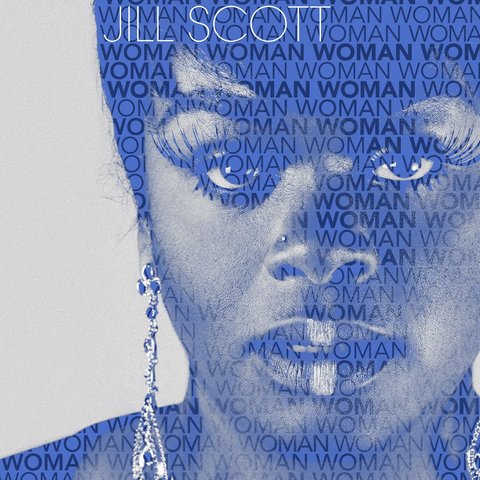 First and foremost, Jill Scott is JILL SCOTT!!!, the Neo Soul chanteuse/poet who delivered classics like "Womanifesto", "Hate on Me", "Golden" and my personal pic,  "Gettin' in the Way". Say whatever you want about Jill (most especially with all the backlash on social media from defending Bill Cosby, someone that comes from where she comes from - north Philadelphia) one thing you cant deny is her ...


tell-it-like-you-mean-it attitude she always delivers in song and real life. This Captivating "Jill" quality can be found all up and through her fifth studio album "Woman". The aptly titled set displays a fully developed woman in all aspects as the music and even her voice has a new found confidence and assurance (not to say that Jill Scott from album 1 to 4 was not confident but this is somehow relaxed yet obvious and more certain). You can even tell of her confidence from how she referrers to herself on songs like "Can't Wait" as the "The Boss Lady" and on "Run Run Run" she's a "Super woman, flying through the city". She's also a "Tornado, a Lightening" on the song "Lighthouse". All these Titles are not just mentioned in passing but help to paint a picture of where Jill is at in 2015.
and that version of Jill fully understands her role in love and life and we all know its not easy to get to that point where you fully get what the purpose and point of it all is, but you can tell that she right there ... in the Know.
"Woman" is a record based on her "journals" and it generally falls on two pillars: Love and life and her place in all of it. What's good to note, even with all the superhuman stances on "Woman", is that she still shares her human flaws like "believing things that just were not true" and being "blinded to my core" on "Fools Gold" which is the sets first single and aptly so.
Another general theme here is intuition and how she has learned to trust in it, in love and in life.
"Closure" is a song about breakup sex and knowing exactly where you stand afterwards (The skit immediately after the song is hilarious).
Another single off the record is "You Don't Know". This song has that soul/jazz Ella Fitzgerald retro feel that basically highlights how much of a risk love really is and that "you don't know nothin' about love" if you haven't faced all those risky situations and feelings personally.
There is a spiritual side to "Woman" where even in her confidence she still needs sometime for a "necessary breakdown" with her "hands towards the clouds" because she's been "slippin'" so there is a need get back to the source if not she will be "stuck". She goes further on "Say thank You" to acknowledge the presence of a higher being and the need to connect in order to find yourself and your substance. Even on "Back Together" there is the church choir effect to give off a spiritual vibe (though the song is about her son, Jett Hamilton Roberts, it could also be about how God or a love interest "put me back together ... again")
"Cruisin" is a highpoint on the record. Its a song about taking a "Cruz" in order to "clear my mind". i.e. reconnecting with self in order to "breathe".
So even if the record in a whole comes off as Jill being confident, at its core, its a vulnerable record where she preaches the human element with all its many, many flaws and what it took or takes to achieve what she believes is the total and complete "Woman"
The instrumentation on "Woman" is very live and classical in its employment of brass, horns, violins and Percussion like on upbeat songs "Coming To You", "Closure" and "Run Run Run" but its also very contemporary and it evokes a lot of 'right now', 'back then' and everything in between (but be rest assured that the music on here does not sound like the ratchet electro R and B on the radio right now; I guess you could say in that aspect Jill chose to switch off her radio and follow her intuition as she has always done right from the classic "Who Is Jill Scott? - Words and Sounds Vol. 1"). Its very emotion-driven even on the slow songs like the epic "Jahraymecofasola" where little instrumentation is used to evoke great lengths like where she says she's "putting infinity into a melody" in order to "see how it sounds ... and it sounds like Jahraymecofasola" #breathtakingmoment
"Woman" on a whole, is a bold statement of where Jill has been and where Jill is right now; its like going through the many versions of Jill to get to the "Perfoct" one. Its like when she duets with soul vocalist  BJ The Chicago Kid, on "Beautiful Love" to express "magic"; "Woman" feels a lot like Jill has found "Magic" by combining love, life, knowledge of self and God to get to this point and how glorious this point looks. Another classic for the ages.
P.S. I love this interview so much, Jill Is truly deep!