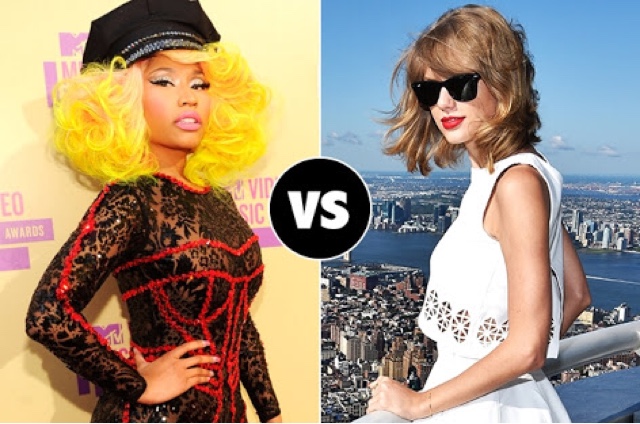 So I was scrolling through my phone checking out various entertainment stories when this one caught my attention. Honestly when I first saw the VMA nominations, I wasn't phased. I only noticed that Taylor swift and Ed Sheran had a lot of nods; anyway fast forward to yesterday and  ...it then occurred to me that the "feeling myself" and/or "Anaconda" video by two of the hottest females on the planet was not nominated for video of the year and then Twitter went off!!! Apparently I wasn't the only one and then Nicki chimed in with a lot of tweets both from her and retweets from offended fans. She eventually mentioned that if it was a slim girl, they would have gotten nominated then shit hit the fan!!!!! Taylor felt it was directed at her and then chimed in and she also added that wherever she is accepting an award (if it's the VMS's) nicki is free to come up the stage with her and represent. And then it goes on to become a press thing about both stars throwing jabs

Here's my take on it. First of all, "feeling myself" and/or "Anaconda" should have been nominated because I for one was not fully on board with that single till I saw the video and now it's constantly on repeat on my playlist. Secondly yea Nicki played the race card but fundamentally is she not right? She may not have won but at least nominating them on that category was necessary because of the innovative tracts behind it (Tidal is a whole other  blog post) plus Beyoncé and nicki in a video..... Need we say more!!!! Lately I get that Taylor has become a very influential voice to recon with (the apple streaming fix up) and I'm a fan but I must say that she needs not reply every issue she reads on social media whether directly or indirectly about her, she's ruling the charts and changing the music game so why waste time only to find out that it's not about you. Anyway they made up and all is well
Finally I'm pretty sure that MTV is going to use this to their advantage (e.g. A Taylor swift / Nicki minaj comedy skit on stage at the show). I'll be watching