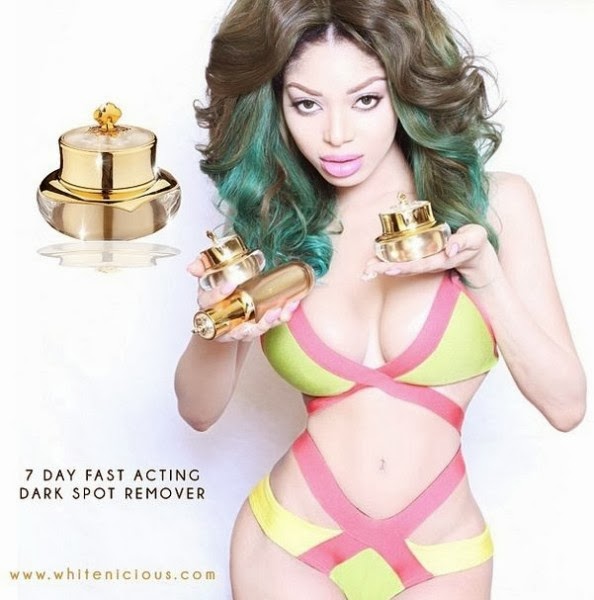 In early January, Cameroonian pop singer, Dencia, launched a new skin care line, Whitenicious. Within 24 hours, it sold out---and "before" and "after" pictures of the entrepreneur set the internet ablaze. Three weeks later, sales approach 20,000 units and show no signs of slowing down. Although the product promotes itself as a “7 day fast acting dark spot remover,” many have criticized Dencia for not only promoting skin lightening, but self-hatred among women of color and more specifically, African women. Despite the backlash, Dencia stands behind Whitenicious and believes that she is in fact helping women overcome an obstacle. Here, Dencia tells her side of the story.

EBONY: So you know there’s been a lot of buzz about you on the internet here lately. Everybody’s talking about your new skin care line, Whitenicious. Tell me how you came up with [it.]

Dencia: And I’m happy that they’re talking because my sales are skyrocketing. Anyway. A few months ago, I was coming back from Switzerland. I sat by this chemist. He’s from Switzerland. We started talking about all these things and he was like “You have really nice skin.” He asked me if I was Puerto Rican by the way. I was like “No, I’m African.” We started talking about skin care and stuff and then I told him how I’ve been doing all these things, going to dermatologists for the problems. Every woman does that. Like when you have a little spot on your face. I know I do. I’ll be running from dermatologist to dermatologist trying to find something to get rid of the dark spots. Unfortunately, all dermatologists will give you hydroquinone 4%. It don’t matter if you’re as dark as Alek Wek or you’re as White as a blonde girl from Malibu. They’ll give you the same thing. So he was telling me that he makes some products and that he has a line. He asked me if want to be the face of it. And I was like you know what? We’ll talk about it. I had come up with this mixture of things that I’ve been using, not for my skin but for my face for like when I had dark spots or when I hyperpigmented anywhere on my body. And so I sat down with him, we tested it, we looked at it, we added stuff and then we came up with the product. I tested it on me and on my sisters. I have a sister that has suffered with acne for a long time and she had dark spots. So she used it and it worked really good. And I went on Facebook and I asked my Facebook friends if they wanted to try it. They tried it, and it worked really well. And mind you, this product doesn’t have hydroquinone, it doesn’t have steroids, and it doesn’t have mercury.

So, when the time came to pick out the name for the product, I was talking to my best friend and she was telling me, if you’re picking out a name you have to look at something that is attractive. When you see Whitenicious, you see the container, you see the product, obviously you’re thinking this is gonna work, right? That’s what you’re thinking. We came up with different names. You know, I was coming up with all these glamorous things and my best friend was like “Nah, ‘Whitenicious’ is good.” And when she gave me the name, I was looking up definitions of white. Ok let me define how I see white. (reads) “The color white affects the mind and the body by aiding in mental clarity, promoting feelings of fresh beginnings and renewal assisting in cleansing, clearing obstacles and clutter and encouraging purification.” And guess what? Dark spots is obstacles. Hyperpigmenation is obstacles.

EBONY: Is dark skin an obstacle?

Dencia: No. Dark skin is beautiful.  Actually, I will send you pictures of when I was 16. I’m not that lighter from when I was younger, I’m not. The picture they’re passing around where I’m wearing the animal print underwear, that picture was three years ago and that was a tan. If anybody looks at that picture and you look at the oil on my skin, you would know it’s a tan. And it’s funny because one of my friends who was at the photo shoot with me that actually oiled me up with the tan sent me a message yesterday. She was like “Why are people going crazy about this picture when you were tanned on this picture?” I was never that dark in real life and I can send EBONY pictures of me when I was like 15, 16. And guess what? I don’t even care because they’re bringing me business. Because when you take that picture and you put a picture of Dencia darker, this is what you’re telling people – the product really works. And guess what? People really want to buy it.  It’s what it is. I don’t really care.

EBONY: So…you haven’t bleached your skin, is what you’re saying? You were tan in the before pictures?

Dencia: Have I…Has my skin lightened from when…like from the past five years? Yes it has. It has. Has it drastically lightened? No it hasn’t. Is it what people are saying? No it’s not.

EBONY: Okay. But do you understand people’s response to the pictures? Because many people have become aware that skin bleaching is a big phenomenon around the world, particularly in West Africa where you’re from. And so then we see one picture of you or a few pictures of you where you look browner and then we see this new picture of you, and not just that it’s a picture of you per se, but an advertisement for a product called Whitenicious. And then it says “Say goodbye to pigmentation and spots forever.”

Dencia: First of all when I did the photoshoot…let me tell you something, I did the Whitenicious photo shoot on the 13th of December, 2013. I just came back from Paris. I was in Europe for a month and I was indoors. I don’t go outside a lot generally. If you’re light skinned and you stay indoors a lot it’s gonna give you that pale look. And then I had just been going back and forth to the hospital because I was not feeling too good. My health is not very stable and it’s not because of anything with this, it’s something that I’ve had since I was a little girl. I was dehydrated and they gave me the drips to hydrate me. And when you come out with all those things, it makes you fresh and it gives you that pale look because you’ve not been out in the sun. That is why those pictures look like that. And everybody, even my sister said “Are you okay?” because they knew I was not feeling good. So it’s not about being pale because I’m bleaching my skin. It’s just because I stay indoors a lot and I take a lot of vitamins. Lots. And all those things have effects on your skin. And in the past I’ve probably taken medications that… you know there’s a lot of medications that have side effects of lightening your skin too.

And anyway, the picture clearly says “Say goodbye to dark spots and hyperpigmentation.” I’m not saying “say goodbye to your Black skin and try to be like Dencia.” That’s not what I’m saying. I’m saying “say goodbye to dark spots and hyperpigmentation.” Now did I choose to do beginning pictures for a reason? Yes, I did. I did that because sexy sells. Period. I have men, White men, Black men, buying Whitenicous. Guess what is attracting them? Those pictures. And guess what they’re using it for? Dark spots. Not to bleach their entire skin. I don’t think a White man is trying to bleach his skin.

Trust me, I’ve been running this business for the past three weeks and I’ve read all these emails from girls telling me about how they have this hyperpigmentation, how they have these dark spots. I have seen so many pictures. These girls are not trying to bleach their skin. They’re just trying to get rid of these little things that is making them feel uncomfortable, you know?

EBONY: I hear you, I do. And you’re right, many women of African descent, many women of color, we do suffer from hyperpigmentation.  So there are lots of products on the market that work to fade out those spots, if you will. But there are also products… and you know this, especially in West Africa. We see the billboards, we see them in the markets, we see the women with all of the damage on their skin – there are products out there that are used to bleach the skin. Your product is called Whitenicious, of course people will buy it because they want to bleach.

Dencia: Ok. Will Whitenicious bleach your skin if you use it on all your skin? Yes, it will.