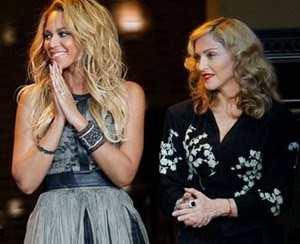 The 56th GRAMMY Awards will be a star-studded event, with performances coming from Taylor Swift, Paul McCartney, Macklemore & Ryan Lewis, Daft Punk and many more on Sunday, Jan. 26. Two more superstars may be added to the fold, however: according to a report from the Los Angeles Times, Beyonce and Madonna are expected to ...
take the stage at the ceremony, to be held at the Staples Center in Los Angeles.
The report points to a recent interview with GRAMMY producer Ken Ehrlich, who does not confirm or deny the pop divas' participation in the upcoming event. Representatives for Beyonce and Madonna did to respond to requests for comment at press time.
Beyonce, of course, is no stranger to high-profile surprises: the singer released her self-titled fifth studio album out of nowhere last month, and the album subsequently topped the Billboard 200 chart; its current sales stand at 1.5 million, according to Nielsen SoundScan. A GRAMMY Awards performance would be her first televised showcase since the stealth album launch.