Angie Miller Eliminated on 'American Idol' While Candice, Kree Press On to Finale 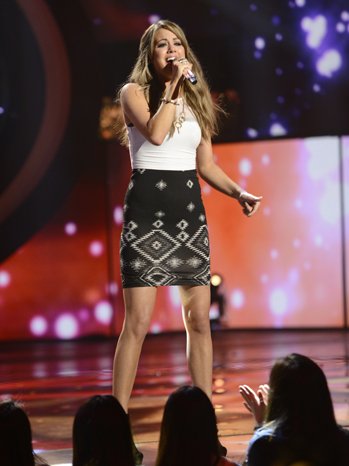 Angie Miller first became a frontrunner on "American Idol" when she took a turn behind the piano and performed an original song, "You Set Me Free," during the show's Hollywood rounds. The judges were full of praise, and the 19-year-old Massachusetts native, who went from 'Angela' to 'Angie' during the course of the competition, was sent through to the voting rounds of the show. But ...
Miller spent the rest of the competition trying to revisit those highs. Though there were nights when the singer was well-received by the judges and seemingly by America, which never placed her close to elimination in the previous weeks, the accolades were never to the level of her self-penned tune.

On Thursday (May 9), Miller's run on "Idol" ended at the top three, after her elimination from the competition in third place.
Her exit from the show follows a Wednesday night performance show during which she was deemed the round one winner by Jimmy Iovine after her rendition of Elton John's "Sorry Seems to Be the Hardest Word." She followed the performance with "Try" by Pink, showing off her up-tempo rocker side. Finally, she took on Emeli Sande's "Maybe," taking  a spot behind the piano that the judges and Iovine so seemed to hope she'd play every time.
To close her "Idol" tenure, Miller sang a tearful exit song, at times unable to sing due to being so overwhelmed with emotion.
Her elimination paves the way for a finale of Candice Glover and Kree Harrison. Once the victor is crowned, it could be the end of an era; rumors are swirling that the show could be in for a major makeover for its 13th season, which was confirmed Thursday with a list of audition venues next summer. Longtime judge Randy Jackson has already announced he'll no longer take part in the show following next week's finale.
Lauren Alaina, who finished runner-up two years ago on the show, returned to "Idol" to perform "Barefoot and Buckwild," the first single off her untitled second studio album, which she began recording in January. Alaina, part of 2011's country takeover of the show, co-wrote the tune.
Also performing was Alicia Keys, who played "Tears Always Win" from her 2012 LP, "Girl on Fire."
Mariah Carey premiered the video for new single "#Beautiful," which features Miguel. It's a #sunny video, with plenty of #pow moments, #darling.
Posted by afowzocelebstar