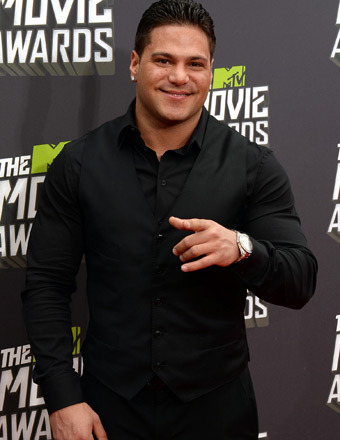 Reports confirm that "Jersey Shore" star Ronnie Ortiz-Magro was hospitalized in Florida on Saturday (April 27) after experiencing severe pain from ...
kidney stones. The first-pumping GTL-partier was in Orlando promoting his new alcoholic beverage line Smush Cocktails when he suddenly fell ill. The "Ron-Ron Juice" originator tweeted about his predicament over the weekend.
On Saturday, Ronnie sent out the simple tweet:
@MTVRonnie: "Hospital." He followed up on Sunday with: @MTVRonnie: "Wouldn't wish this feeling on anyone! #KidneysFML."
It turns out the infamous 27-year-old MTV reality star is suffering from kidney stones, "a solid concretion or crystal aggregation formed in the kidneys from dietary minerals in the urine." He still remains in the hospital. Ronnie was out promoting his new 34-calorie Smush Cocktails line when the pain first occurred.
One Twitter follower suggested Ron take some protein - the "juice-head" tweeted back, "I have to because I can't hold any food down from the pain. Worst feeling... So uncomfortable."
Ronnie's reportedly still dating "Jersey Shore" co-star, Sammi "Sweetheart" Giancola.