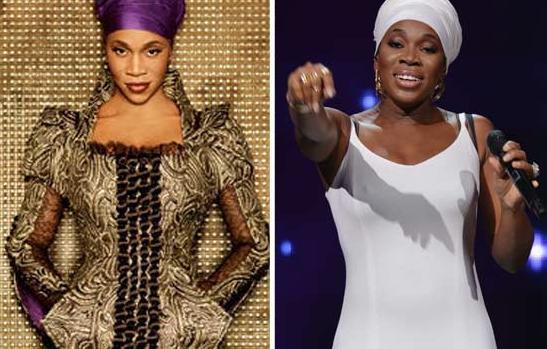 As far as some folks are concerned, singer India.Arie has pulled a Vybz Kartel kind of move. Yes, the thinking is – based on the cover of her new CD, “Cocoa Butter” – that she’s gone and bleached her skin! But India.Arie is laughing off the rumors. She thinks that’s the craziest thing she’s heard. “Personally speaking! I’m happy to say I have ...
NOT BLEACHED my skin LOL! ROTF at the thought,” she tweeted.

Meanwhile, sources close to India tell TMZ, the criticism is ridiculous … because the “lightened” skin is merely the product of the camera flash and angle. India never asked to be lightened.
Of course that makes one wonder why she and/or her camp approved the photo. So far no answer to that question. But Miss India.Arie says she loves her brown skin as it is more than ever.
She added, “1. I wouldn’t endanger my health that way 2. i’m so in love with myself I have no DESIRE to BLEACH myself. 3. The GLOW you see IS (magnificent) lighting 4. THE LIGHT you see, Well thats all ME!!”
She also added:
“Politically speaking, racism/colorism in the black community is a MUUUUUUUCH larger #SongVersation #skinversaton,” she continued, adding, “We can disagree … but watch your tone and you language on my time line.”
In my openion, i totally hated the act of enhancing your skin but i came to the realization that everyone is entitled to do what they want with their bodies but take caution as these actions have later consequences nuf said!
Posted by afowzocelebstar