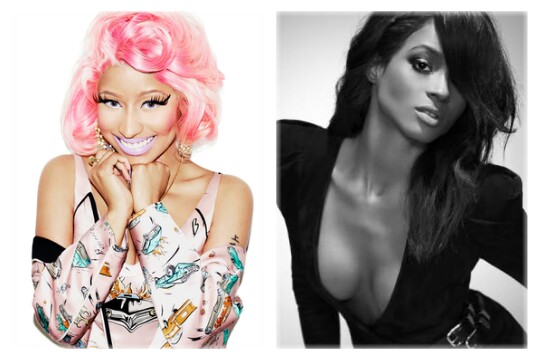 Ciara has unveiled details of her Nicki Minaj collaboration, revealing that working with the rapper was "magical". The pair have joined forces for 'I'm Out', which will appear on Ciara's upcoming self-titled album.
"The energy of the record is so dope, and it's really for the ...
ladies, and Nicki she just killed the verse," Ciara told MTV News.

"She literally murdered it, like she got that throw-back, that thing that she does that's so special. She went in."
Minaj, who previously worked with Ciara on 'I'm Legit' from Pink Friday: Roman Reloaded - The Re-Up, previously teased that she will probably appear on more than one song on Ciara.
"It's looking like it," Ciara confirmed. "She's actually finishing up one now that's really a monster too. The moments that we have had so far have just been crazy.
"It's just been magical, it's been something special and I feel like the fans have always wanted to see she and I rock together." Meanwhile i have to say that Ciara turnt out the new Body Party Video and made me a believer once again! u go Girrlll!!!!