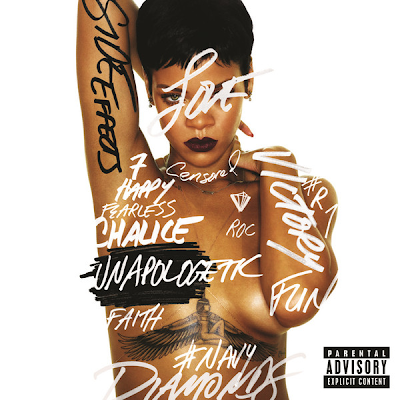 On paper, Rihanna releasing her seventh album in seven years would suggest a quantity-over-quality work ethic that's bound to wear thin. But on "Unapologetic," Rihanna proves once again that she can set -- and often raise -- the bar for modern pop music (although to be honest, some songs lack a bit in the desired quality i personally was expecting this far in her career).
Which songs on "Unapologetic" are the strongest? Read on for a track-by-track review of Rihanna's latest.

1. Phresh Out The Runway - "How could you be so hood but you're so fuckin' pop? How could you be so fun and sound like you're selling rocks?" Rihanna quotes one of her doubting peers in this swaggering, gritty club banger produced by The-Dream and David Guetta. "Unapologetic" is all about shaking up expectations, so opening with a straight-up hip-hop track produced by the biggest name in EDM quickly sets the tone.

2. Diamonds  As written by dance-pop torch singer du jour Sia Furler, "Diamonds" finds Rihanna doing one of her throatiest, most impassioned vocals to date (and one that seems to be channeling Sia herself) on this inspirational pop ballad. And as a strategic shift from recent singles like "Talk That Talk" and "Cockiness," "Diamonds" further positions Rihanna in new stylistic categories, lest she settle on one format for too long.

3. Numb (Featuring Eminem) - The last time Rihanna teamed with Eminem, it was on the massive, emotional "Love The Way You Lie." This time around, the duo only has the club on its mind on this slow-grinding, Middle Eastern-flavored party track, which opens with Rihanna shrugging, "Ecstasy in the air / I don't care / Can't tell me nothin.'"

4. Pour It Up - (one of my faves on the album) It's not just the dudes who can flex their money and love of strippers. Rihanna turns her often-racy Twitter feed into an irresistible, Mike WiLL-produced banger for the ladies, chanting "Pour it up / pour it up / watch it all fall out" over a hypnotic beat and hand claps  Take note, 2 Chainz, Juicy J and the like - Rihanna's coming after your territory.

5. Loveeeee Song (Feat. Future) - Future's Auto-Tune-soaked plea for "love and affection" gets a definitive response from Rihanna on this percolating duet.

6. Jump - Sure, "Gangnam Style" is the horse-dance craze of 2012, but Ginuwine's "Pony" has been having quite the cultural renaissance this year, thanks to its key role in the summer blockbuster "Magic Mike" and now this dubstep-ified update from Rihanna. "Jump" is an answer song of sorts to Ginuwine's 90s classic, adding new verses on top of the existing chorus, which now erupts in a wall-shaking Skrillex-worthy breakdown. "You think I give a damn / but you know who I am / I don't go around chasing no dude," Rihanna reassures her conquest.

7. Right Now (Feat. David Guetta) - Perhaps the only song that adheres to the expected formula carved out by "Loud" and "Talk That Talk," "Right Now" is a straightforward, four-on-the-floor feel-good anthem for the clubs. Thematically identical and musically similar to Ne-Yo and Calvin Harris' "Let's Go," "Right Now" is exactly what you'd expect from the latest Rihanna-Guetta team-up, and nothing more.

8. What Now - An unexpectedly vulnerable ballad from Rihanna that finds her acknowledging "this lump in my throat" before letting loose on an epic chorus that hits harder than anything she's done in years. An emotional highlight on an album filled with moments of resonance in its second half.

9. Stay (Feat. Mikky Ekko) - As premiered on last week's "Saturday Night Live," "Stay" is Rihanna at her most intimate - a piano-backed duet with Brooklyn singer-performance artist Mikky Ekko with a 70s AM-radio melody that recalls Elton John or Billy Joel. If this is Rihanna indulging her adult-contemporary side, she couldn't have picked a stronger ballad to demonstrate it.

10. Nobody's Business (Feat. Chris Brown) - If "Nobody's Business" featured anyone but Chris Brown, it would still be celebrated as a wonderfully catchy throwback to early-90s club music. But because it's a duet in which the tumultuous lovers proclaim "you'll always be the one I want to come home to" and "you'll always be my baby" for the world to hear, it makes the beyond-complicated circumstances of their history impossible to ignore. Judge for yourself -- just try to resist the song's many Michael Jackson-worthy charms.

11. Love Without Tragedy / Mother Mary - Coming right after "Nobody's Business," it's hard to think that the first half of this seven-minute two-partner is channeling anyone but Chris Brown when Rihanna sings, "You took the best years of my life / I took the best years of your life / Felt love struck me with a knife / I pray that love don't strike twice." But just before things get any more somber, the song takes a confessional shift when the "Mother Mary" part kicks in, with Rihanna softly singing, "Mother Mary / I swear I'm gonna change / Mr. Jesus, I'd love to be a queen / But I'm from the left side of an island / Never thought this many people would even know my name." A deeply personal song sold by Rihanna's uplifting vocal.

12. Get It Over With - Taking the tempo down a notch, this dreamy track from James Fauntleroy and Brian Kennedy, who co-wrote half of 2009's "Rated R," is a chilled-out, reflective song that finds Rihanna "wondering why you keep thundering / won't you just fuckin' rain / and get it over with."

13. No Love Allowed - (My fav on the album right now) Much in the same way that 2010's "Man Down" saw Rihanna paying tribute to her Barbados heritage with a reggae torch song, "No Love Allowed" takes a similar approach over a bubbly, dubbed-out groove from producer No I.D. "Broken heart was the case / go'on and put him away /  He's the only one one one / I let get the best of me," she cries to the love police.

14. Lost In Paradise - Ending things on a somber-but-hopeful note, this bouncy StarGate track finds Rihanna clouded by past heartbreak when she sings, "It may be wrong but it feels right / All my fears are gone tonight / I'm so lost in paradise." What could otherwise be a forgettable midtempo ballad is saved by frequent tempo drops and interjections of "Bass slap!"
Posted by afowzocelebstar