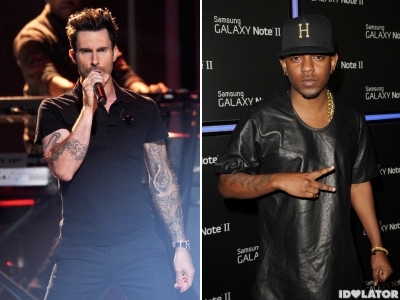 Live from New York, it's Adam Levine! The Maroon 5 front man and "Voice" mentor has been confirmed to host "Saturday Night Live" later this month. He will become a first-time host during the January 26 airing of the longtime late-night comedy staple. He will be joined by musical guest and good kid, m.A.A.d city rapper Kendrick Lamar, who is all set to ...
take the famed "SNL" stage that same night. This is Lamar's first time on the show. However, this hardly marks the first time that Levine has been on the show. Maroon 5 was a musical guest back in 2004 when his one-time "Voice" co-mentor Christina Aguilera hosted. The band has since been on the show several more times including appearances in 2007, 2011 and 2012.

Kendrick Lamar, Big Sean Have Big Things Planned for 2013 It's also been confirmed that "Hunger Games" actress Jennifer Lawrence will host the first show of 2013 on January 19. The Lumineers will perform that night, riding high off the release of their breakout hit, "Ho Hey." Lawrence was first attached to the "SNL" gig last month. Lawrence, who recently was nominated for a Golden Globe for her work in "Sliver Linings Playbook," and the Lumineers are both first-timers on "SNL."
While they are the only acts confirmed for the 2013 slate of shows thus far, one singer is making a bid to appear on the show before the season's end. On Wednesday, in a flurry of tweets about his excitement over his January 29 acoustic album release and kick starting the next leg of his Believe tour, Justin Bieber simply shared, "2013. what's coming? #snl ???"
Posted by afowzocelebstar