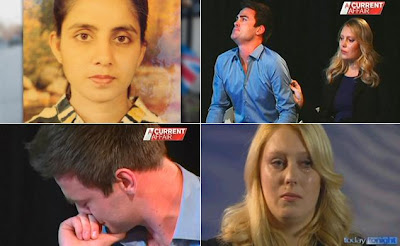 The pair of disgraced deejays vilified for their prank call on a London nurse who later killed herself say they’re “heartbroken” — but stopped short of a full-throated apology.
Southern Cross Austereo, which carries the 2Day FM show in Australia, also announced over the weekend they were cancelling the "Hot 30 Countdown" and issued a company-wide suspension of prank calls, according to The Sydney Morning Herald. In their first interviews after their radio stunt caused an international uproar last week, Aussie shock jocks Michael Christian and Mel Greig gave teary-eyed appeals that ...
they never meant to cause harm in a traumatic trick that was merely “designed to be stupid.”
A shaken Greig said she immediately wanted to know whether Jacintha Saldanha, who was found dead Friday, was a mother. The 46-year-old nurse was a wife and mom of two teenaged children.
Saldanha's husband, Ben Barboza, took to his Facebook page over the weekend to express his grief, writing: "I am devastated with the tragic loss of my beloved wife Jacintha in tragic circumstances, She will be laid to rest in Shirva, India."
Saldanha reportedly hanged herself in the nurses’ quarters at King Edward VII Hospital in London, where she worked for four years, according to The Sun.
“Very sorry and saddened for the family, and I can’t imagine what they’ve been going through,” Greig said in an interview that aired Monday on the TV program “Today Tonight.”
“I’m gutted, shattered, heartbroken,” Christian said, adding, “We’re still trying to get our heads around everything, trying to make sense with the situation.”
Greig said the stunt, in which the pair called the hospital pretending to be Prince Charles and Queen Elizabeth inquiring about a pregnant Kate Middleton, was “never meant to go that far.”
The accents were terrible. You know, it was designed to be stupid. … We always wanted it to be a joke,” she continued.
But when asked whether they would do the stunt again after knowing the outcome, the pair hesitated.
“If we played any involvement in her death, then we’re very sorry for that and time will only tell,” Greig said.
Saldanha was the one who answered the deceptive duo’s call and then patched them to a colleague who was caring for Kate. The Duchess of Cambridge was admitted to King Edward VII Hospital on Dec. 3 for acute morning sickness — a debilitating condition that forced her and husband Prince William to reveal she’s pregnant with their first child.
The deejays initially celebrated their success in getting a hospital employee to confirm Kate’s condition. Backlash, however, grew after some listeners complained about the call’s invasion of privacy.
Kate, 30, was released Thursday, and she and William said in a statement they were “deeply saddened” by Saldanha’s death. An autopsy is scheduled for this week.
Christian and Greig were taken off the air indefinitely before their bosses announced that advertising on the radio station was suspended over the weekend.
Christian told “Today Tonight” that their prank call was never meant to make someone else feel responsible.
“I suppose the joke was always on us, not anyone else,” he said. “It wasn’t about try and fool someone. We just assumed that with the voices that we put on, we were going to get told off and that was the gag.”
He sidestepped a question about whether they were ever given legal training on how to properly handle their prank calls. The pair said higher-ups ultimately decide whether a bit can be aired.
“We wanted to be hung up on,” Greig said of the royal-related prank.
“There’s no malice in the call,” Christian added. “There’s no digging.”
Greig said they’re not concerned about their careers at the moment, and are ready for any possible inquiry by Scotland Yard. Australian authorities said Sunday that London police have been in touch, but didn’t make any formal requests as part of an investigation.
“We care more about the family,” Greig said, adding that she wanted them to know “we are thinking of you and if we could call you, we would want to reach out to you.”
Saldanha’s family in her native India said they plan to collect her body for burial. The woman’s 14-year-old daughter wrote on Facebook last week, “I miss you. I loveee you.”
Hospital officials said they hadn't planned on reprimanding Saldanha. Friends told the Daily News she wouldn't have killed herself unless she was stressed.
“She’s a very strong person. It’s definitely stress from work," the friend said. 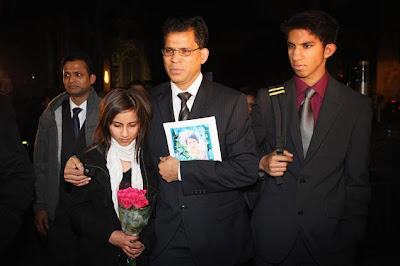