NICKI MINAJ BLOWS UP ON MARIAH CAREY DURING ‘IDOL’ AUDITIONS 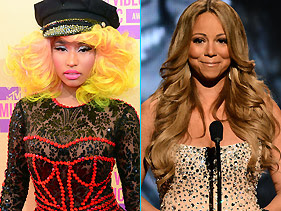 From the moment the rumors began to circulate that Nicki Minaj might join the "American Idol" judges' panel alongside Mariah Carey, people started to speculate about how the two larger-than-life superstars would get along. And the speculation has continued since Minaj was confirmed as a judge, at which point both women went on record to assure everyone that there was absolutely no animosity between the two of them — at the time.
TMZ has obtained video of Nicki Minaj lashing out at fellow judge Mariah Carey during auditions in Charlotte, North Carolina. After disagreeing over a contestant’s performance, Nicki loses her cool, shouting ...
, “I told them, I’m not f*ckin’ putting up with her f*ckin’ highness over there.” Sources tell TMZ that she also threatened to “knock out” Mariah. Producers ended the auditions early so the two judges could cool off. They are reportedly worried that this could have longterm effects on the show.

The shooter of the video has not yet been identified, though judging from the camera angle, the clip might have been captured by someone involved with the production or someone who was granted access to the audition rooms. It is also unclear what caused the heated exchange because the clip opens in the middle of a back-and-forth between Minaj and Carey.

"I'm not going to take it back, and if you've got a f---ing problem, handle it," Minaj says to the room. Fellow judge Keith Urban, who was sitting between Minaj and Carey, looks like he's trying to calm down Minaj, who seems to tune out everyone else in the room and continues her rant.
"Figure it out!" Minaj yells repeatedly.
"Ohhhhh, why, why, why?" Carey responds. In the midst of Minaj's loud reactions, it sounds like Carey brings up the subject of her two children, whom she would like to be spending time with versus arguing.
"Good, well then go see them now. Go see them now!" Minaj shoots back. The clip ends mid-argument, with a helpless Keith Urban stuck in the middle. This is serious oh! yall need to get ur ish together
Posted by afowzocelebstar