Bruno Mars Returns with 'Locked Out of Heaven' 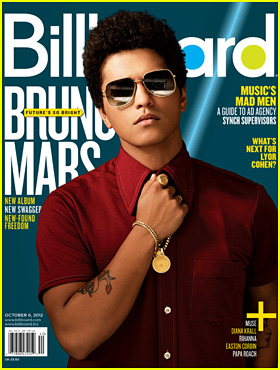 After spending much of 2012 out of the spotlight, Bruno Mars re-emerged Monday night with a YouTube video chat during which he answered fans' questions and premiered his new single, "Locked Out of Heaven." It's a lean, bouncy soul-rock cut that quickly mushrooms into a dramatic synth-pop epic -- think the Police (circa "Ghost in the Machine") infiltrating the Human League.
"Your sex takes me to paradise," Mars moans in the song's chorus, and if you were wondering whether all that grenade-catching had made a man out of him, there's your answer. Listen to the song below.

"Locked Out of Heaven" is the first taste from Mars' upcoming sophomore disc, "Unorthodox Jukebox," which is set for release Dec. 11. The follow-up to 2010's hit "Doo-Wops & Hooligans," "Jukebox" reportedly includes collaborations with Mark Ronson, Jeff Bhasker and Diplo (according to Billboard), but contains no guest vocals -- a surprise, perhaps, given Mars' frequent appearances on singles by B.o.B., Travie McCoy and Lil Wayne, among others.
"It's my . . . album," he told Billboard in the magazine's current cover story (with an added modifier for emphasis). "It should just be me, right?"
Further ramping up pre-album promotion, Mars will hit "Saturday Night Live" -- as both host and musical guest -- on Oct. 20. We suspect it'll be the first in a long line of TV spots between now and Christmas.