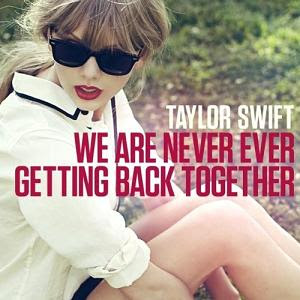 Jake Gyllenhaal might have to go into hiding come October 22, when Taylor Swift's album Red is due to hit stores. The country cutie announced the album title and unveiled her poppy new single, "We Are Never Ever Ever Getting Back Together," to fans in a ...
live YouTube chat on Monday evening.
I tend to skew in the direction of writing songs about love-related things, relationship- and feeling-related things, that's where I naturally go," Swift said of her inspiration. "I ended up being inspired by a lot of zero-to-100 then it hits a wall and explodes- type relationships which are so fun to write about, really dysfunctional and not good generally but when you write about them it gives you a lot of inspiration."
Swift's explanation of the album's title suggests that the new record will be much darker than previous efforts: "I wrote a song called 'Red' and thinking about what that song means to me and all the different emotions on this album they're all pretty much about the tumultuous, crazy, insane, intense, semi-toxic relationships I've experienced in the last two years and all those emotions fanning from intense love, intense frustration, intense jealousy, confusion, all of that in my mind, all those emotions are red. There's nothing in between, there's nothing beige about those feelings and so I called my record that."
Expect Swift's next album to be titled Nashville Camelot, now that she's dating 18-year-old Conor Kennedy.