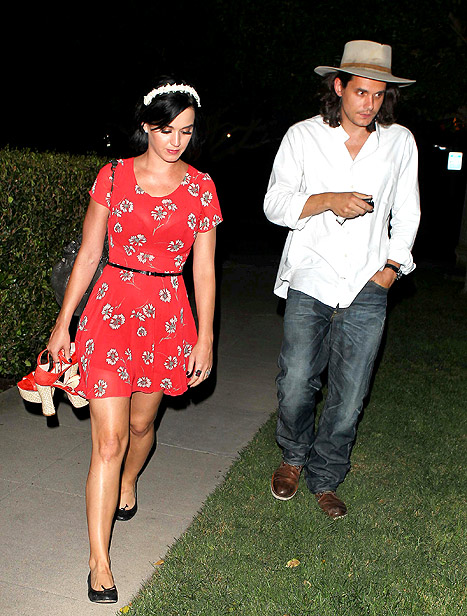 With her ill-fated union to Russell Brand now in the history books, a newly single Katy Perry has found romance with fellow singer John Mayer. But the pop tart’s inner circle is a bit worried about her latest choice of partner. The musician has dated a string of ...
famous beauties in the past, including Jennifer Aniston, Taylor Swift and Jennifer Love Hewitt, earning the crooner quite a reputation as a ladies’ man. Perhaps not surprisingly, John’s rep hasn’t earned him many friends among Katy’s pals.
“John has a big reputation as a serial womaniser. If people thought her ex, Russell Brand, was bad, John is notoriously a lot worse. Katy’s friends are worried this is just a rebound bit of fun but will end with her getting really hurt.”
But if Radar Online snoops know their stuff, John’s ready to take his romance with Katy to the next level.
“John has had his eye on Katy for a while and he had to try and convince her that he was right for her. The best way he thought he could do that was by dispelling his past reputation as a lothario to Katy.”
The tattle adds:
“He knew he had to change his ways if he ever wanted to get serious with somebody and he had a heart to heart with Katy, telling her he was desperate to change his ways. Katy believed him and now their relationship is moving on. She wants to visit his home in Montana and has slowly warmed to the idea that he’s boyfriend material.”
John previously landed himself in hot water with a 2010 Playboy magazine interview in which he described Simpson as “sexual napalm” and claimed he was addicted to her “like crack cocaine.” This might be too hot for you K but you never know world! this might just work
Posted by afowzocelebstar