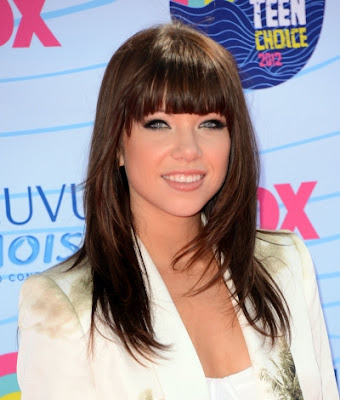 Pucker up! After dropping some hints on her Twitter (some more obvious than others), Carly Rae Jepsen has revealed the name of her new album: ...
Kiss, which is scheduled to drop September 18, along with every other album you’re looking forward to.

“These are lyric and song ideas that I have been collecting over the years,” Jepsen said of her sophomore album, which boasts production by Toby Gadd (The Veronicas, Demi Lovato) and LMFAO‘s Redfoo. “I can’t tell you how lucky I feel to be able to collaborate with some of my dream producers. It has been the most fulfilling experience.”
Kiss is said to be inspired by the music of Robyn, The Cars, Madonna and James Taylor. Which one of those artists inspired “Call Me Maybe”?
Catch Carly performing “Good Time” with Owl City during her upcoming TV appearances on America’s Got Talent (August 22), The Today Show (August 23) and The Tonight Show With Jay Leno(August 28).