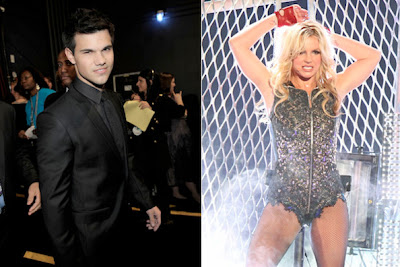 Ever wonder what Taylor Lautner listens to when he's working on his fitness?

These days, it's probably Britney Spears' Femme Fatale. Lautner recently confessed that he's obsessed with ...
the pop superstar's latest album, gushing, "I love her new album. Yeah, it's cool. I haven't seen the videos, I have to see the videos, but the songs are great."
Lautner, 19, says he has no aspirations to launch a career in music, as he's not exactly talented in the vocal department: "I"m sure none of my fans would want to hear me sing a song," he said. "But if I had to choose, it would be 'Oops!...I Did It Again.'"
Taylor is currently linked to actress Lily Collins, his co-star in the upcoming film Abduction. Should Lily be worried about this little crush on Britney or what? (too soon?)_
Posted by afowzocelebstar